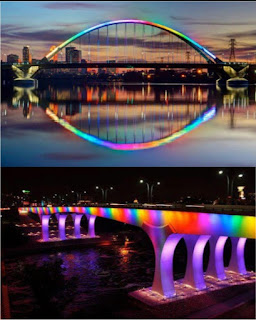 Ian Welsh was this week's guest on Virtually Speaking with Jay Ackroyd, and he predicts a nightmare. (I think he's right about that, but I think he wastes a lot of time talking about generations. Lewis Powell was no baby-boomer.) It might be worthwhile to read what Ian says On Bangladesh's Textile Disasters, because this is a case where the people who run the business can't pretend it's not their fault and all some foreign government issue. (Ian's earlier appearance on VS with Jay is here.)

I've never thought much of Henry Waxman as a "great progressive" in Congress. It didn't seem to me that he was exactly keeping his eye on the ball. This week, one patriotic citizen, Kim Kaufman, asked him if he'd sign Grayson's pledge, and he said no, he'd support chained CPI for "things we want". People need to ask him who "we" are and what "we" want.

Matt Taibbi says, "Who Can Stop the Koch Brothers From Buying the Tribune Papers? Unions Can, and Should." Though, the Tribune papers already being pretty right-wing, I'm not entirely sure we'd know the difference if the Koch's did buy them.

Congratulations to Minnesota for becoming the 12th state to legalize gay marriage.

"Upcoming Trans-Pacific Partnership Looks Like Corporate Takeover [...] The TPP process appears to be set up to push corporate interests over other interests. The TPP is being negotiated in secret, so what we know about it comes from leaked documents. Even our Congress is being kept out of the loop. But 600 corporate representatives are in the loop while representatives of groups that protect working people, human, political and civil rights and our environment are largely not in the loop."

Another reminder from Howie Klein that the worst Republicans are only in office because the Democratic leadership protects them.

"Low-income parents forced to skip work in order to be able to work at all [...] The Post's Brigid Schulte reports that, although subsidies are particularly low in Washington, studies have found that the difficulty of getting and keeping them is similar in most states. Nationwide, just one in six eligible children is covered by the subsidy program, leaving an awful lot of parents with that impossible predicament of needing a job to get childcare but needing childcare to get a job. Then of course there's the kicker - poor women who don't work are stigmatized as mooches or leeches, and poor women who are forced to leave their kids in bad situations while they go to work are stigmatized as bad mothers. America's rotten childcare system is a sign of a nation whose policymakers don't care much about either children's safety or women's ability to make a decent living."

There's a long piece in the Guardian about Cornel West: "He and Obama, the first-time candidate, talked. And then West attended 65 events drumming up support. 'He talked about Martin Luther King over and over again as he ran. King died fighting not just against poverty but against carpet-bombing in Vietnam; the war crimes under Nixon and Kissinger. You can't just invoke Martin Luther King like that and not follow through on his priorities in some way. I knew he would have rightwing opposition, but he hasn't tried. When he came in, he brought in Wall Street-friendly people - Tim Geithner, Larry Summers - and made it clear he had no intention of bailing out homeowners, supporting trade unions. And he hasn't said a mumbling word about the institutions that have destroyed two generations of young black and brown youth, the new Jim Crow, the prison industrial complex. It's not about race. It is about commitment to justice. He should be able to say that in the last few years, with the shift from 300,000 inmates to 2.5 million today, there have been unjust polices and I intend to do all I can. Maybe he couldn't do that much. But at least tell the truth. I would rather have a white president fundamentally dedicated to eradicating poverty and enhancing the plight of working people than a black president tied to Wall Street and drones.' Unsurprisingly, he and team Obama no longer speak. 'They say I'm un-American.'" Since I don't have a link to the Newsnight interview that will play in the USA, have his Craig Ferguson interview, instead.

Bill Murray on the last time they saw Gilda Radner.

1927 London Shown in Moving Color (Thanks to Moshe for the tip.)