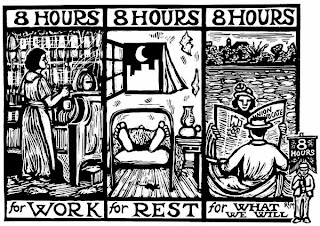 Lots of people all over the world celebrated May day.

The administration floats stuff, people scream, they publicly back off - and then they do it anyway. "Report: Obama Officials Authorized New ‘Cybersecurity' Warrantless Surveillance Program, Fresh Immunity Given to ISPs."

"To keep the lights on, Oslo needs to import trash from the U.S.: Did you know that the city of Oslo is powered by garbage? Amazing and true. The Norwegian capital, home to about 650,000 residents, operates two enormous incinerators which supply the city with about 1.5 terawatt-hours of power." I've always wondered why nobody did this, and now it turns out that somebody is, but we're not hearing about it. I know why we're not hearing about it, of course - the energy industry we have is dependant on our not pursuing alternatives. That's why they work so hard to kill renewable projects like solar power. In fact, they recently released their own report (quietly - and the press didn't seem to notice) saying that they expect to be put out of business by renewables: "Just the other day, Duke Energy CEO Jim Rogers said, 'If the cost of solar panels keeps coming down, installation costs come down and if they combine solar with battery technology and a power management system, then we have someone just using [the grid] for backup.' What happens if a whole bunch of customers start generating their own power and using the grid merely as backup? The EEI report warns of 'irreparable damages to revenues and growth prospects' of utilities."

Bankers Explain How They Cannot Possibly Live On $1 Million Pay

John Kerry finally demands a hand re-count - in Venezuela. It's amazing how many people in the media and in government have suddenly discovered the importance of 100% hand counts of ballots. Long-time readers of The Sideshow will remember that we have always believed in hand-counts, for very good reasons, but that the press and party leadership somehow didn't feel this was important. Except in some other country that isn't doing what they want, of course.

Even in Politico, it's "Democrats ask: What debt crisis?"

"UK.Gov passes Instagram Act: All your pics belong to everyone now: Everyone = Silicon Valley ad platforms tech companies." It's really getting to the point where the individuals who create have no copyright - that copyright belongs to corporations, not creators.

Jeremy Scahill on Democracy NOW! about dirty wars and drones.

Dean Baker: "Robert Samuelson Tells the Middle Class and Poor that They Should Stop Expecting to Have Decent Lives Because His Rich Friends Want All the Money."

Before there was the Interwebs, we had Science Fiction fanzines, like this one, which Norman Spinrad brought to our attention because he says it contains a good interview with him. It's a .pdf of what looks to be a mimeographed zine. Most of us didn't bother to break text up into three columns, though.

Bowie exhibit, "A Dame of Thrones".

"I Want to Hold Your Hand"