A distant ship's smoke on the horizon 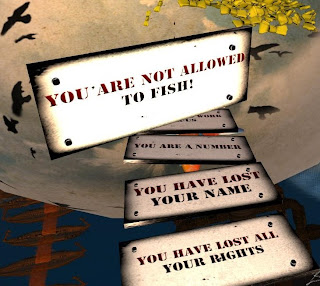 On Virtually Speaking Sundays, Dave Johnson and Gaius Publius discussed the TransPacific Partnership (TPP) and the sheer greed and corruption that drives our current political and economic disaster. Great discussion of how our leaders are orienting policy around feathering their own nests and letting the rest of us drown.
Some background reading:

Gaius Publius, "How Nancy Pelosi Saved the NSA Surveillance Program"
Glenn Greenwald, "Democratic establishment unmasked: prime defenders of NSA bulk spying: One of the worst myths Democratic partisans love to tell themselves - and everyone else - is that the GOP refuses to support President Obama no matter what he does. Like its close cousin - the massively deceitful inside-DC grievance that the two parties refuse to cooperate on anything - it's hard to overstate how false this Democratic myth is. When it comes to foreign policy, war, assassinations, drones, surveillance, secrecy, and civil liberties, President Obama's most stalwart, enthusiastic defenders are often found among the most radical precincts of the Republican Party."

"80 Percent Of U.S. Adults Face Near-Poverty, Unemployment: Survey: WASHINGTON - Four out of 5 U.S. adults struggle with joblessness, near-poverty or reliance on welfare for at least parts of their lives, a sign of deteriorating economic security and an elusive American dream. Survey data exclusive to The Associated Press points to an increasingly globalized U.S. economy, the widening gap between rich and poor, and the loss of good-paying manufacturing jobs as reasons for the trend." (There's a good, short video to go with that story, if you want to watch it on the page.)

"Manning Found Not Guilty of Aiding the Enemy, Guilty on 19 Counts" - This is all Espionage Act crap, and that's a law that, of course, should be repealed. Potential time for the 19 counts could be 100 years; anything more than time served would just be more evil, of course, but it's all evil either way. This shouldn't happen at all. And I noticed this in the story: "In a legal filing last week, Manning's defense attorney David Coomb's requested a mistrial on all charges relating to the embezzlement of government property in violation of a federal statute after Judge Col. Lind allowed the prosecution to alter the charges relating to that statute after legal arguments had already been made. The government sought to change the legal language, asserting Manning stole 'databases' instead of specific records from those databases. The change is legally significant to the case, and since Coombs had already made his arguments, he cannot retroactively change his questioning or arguments in the five counts of theft Manning has now been convicted of. Coomb's renewed the motion for a mistrial July 25." Just one outrage after another.
Sam Seder talked to Firedoglake's Kevin Gosztola on The Majority Report [YouTube video clip] about the terrifying threat to press freedom this prosecution represents.

RJ Eskow on "Banknado: Yes, we know the 'Sharknado' craze ended about ten days ago. The sci-fi movie's premise of tornadoes filled with deadly sharks has probably passed its cultural sell-by date. But we'll use the metaphor anyway, because it's just so apt: Wall Street's a whirlwind filled with predators descending on a hapless population."

I was amused to see Atrios making Kenneth Pollack, of all people, his mid-week Worst Person In The World. Wow, that's a name I haven't heard in a while. I mean, who cares anymore what Kenneth Pollack has to say after he worked so hard to start another war in Iraq? Well, apparently, Brookings still does, and Pollack still dreams of repeating exactly the same mistakes. Yes, there was a faint possibility that, if under certain very specific circumstances, we had invaded Iraq and gone with a Marshall Plan style of rebuilding, we might have had a good outcome in Iraq. Trouble is, there was not and is not anyone in leadership who would even consider such a policy - and that's assuming you really think war is the best way to roll the ball toward democracy. But democracy is the last thing these guys are interested in building.

In comments to the previous post, ifthethunderdontgetya responded to Obama's complaint about Republicans pushing austerity by saying, "Does anyone remember who was President way, way back on February 18, 2010?" Maybe Obama doesn't - as Ted Rall observes, he seems to have Disassociative Political Identity Disorder.

The logic of internet censorship

Saw this in one of KagroX's #gunfail tweets: "JFK Assassination: Did A ‘Second Shooter' Secret Service Agent Accidentally Shoot Kennedy?"

If starships had skeletons

How Michael Whelan created the cover for Words of Radiance

A conversation between two church signs