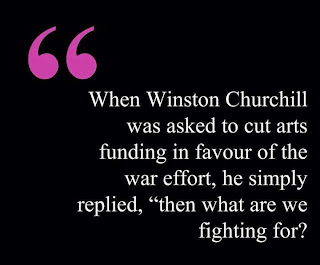 (I don't know if Churchill ever said that, and I kinda doubt it, but it's something we all should be saying whenever they talk about cuts to things that make life better.)

Every day I read the news, and every day I read things that would have seemed impossible 20 years ago. It used to be that when you thought about reading things in the news that would have seemed impossible 20 years ago, you were talking about progress - about some nifty new invention that made life easier - a sewing machine, a dishwasher - or some expansion of the virtues of civilization. And maybe someday we'd all have jetpacks, or teleporters. Maybe we would have racial harmony, maybe even with the plant-people from some planet you never heard of. But most days I feel like the Martians have invaded and they didn't just catch colds and die.

"Set Up To Fail" is an interview with Michael Hudson that you can read, stream, or download as an .mp3:

Keynes had this idea that when there is unemployment, somehow the government spending has to come in and revive employment. That's called Keynesianism. There are a lot of simple Keynesians - even Paul Krugman is that kind of Keynesian. Post Keynesians go beyond that - basically, if there is anyone we look to be beyond Keynes it's Hyman Minsky, but also Randall Wray and myself. And we say that government normally has to not only run a deficit in order to revive the economy, it has to aim at raising living standards and wage levels, not increasing the economy just by printing money and giving it to the banks, which is what the Federal Reserve in America does and what the European Central Bank does. So, we put the real economy first, not the financial sector and the banks.

Plato explained this many years ago. He said that there is an eternal triangle law: democracies turn into oligarchies and within the oligarchies, the oligarchy makes itself hereditary and turns into an aristocracy, and then the aristocrats fight amongst themselves and some of them try to take the people into their camp and become democrats and the whole thing begins all over again. So we're in a stage of western civilization where we're turning from democracy into oligarchy.

Ian Walsh's "The problem of resistance to the oligarchy" is one of the most depressing things I've ever read, and I wish I could believe he is wrong, but I can't find an argument.
Ian's recent appearance on Virtually Speaking with Jay Ackroyd, wasn't quite as depressing. Or maybe it was, I'm not sure I can tell.

Hunter at DKos: "The nation sleeps a dreamless sleep [...] Were we that wrong, before? The Dream may have been dubious, but the void seems worse. Worse than promises of a shared national identity that would come to pass for only some is the new promise that the great heap of everyone will get nothing, and like it; there will be no jobs, save for the grace of the barons; there will be no pensions, because those were the dreams of a too-socialist era (itself fighting communism tooth and nail, perhaps, only to themselves fall to the disgrace of making promises to the working class, a flaw that we must remedy lest communism take the American rust belt one tired pensioner at a time). There will be no big government projects because the new dream says there will be none, and we will like it. Forget the old laws, because businesses have now transcended them. Forget the old duties of government, because the notion that government has duties is itself a petty fabrication."

Sam Seder interview on The Majority Report, David J. Blacker: The Falling Rate of Learning and the Neoliberal Endgame. "Professor David J. Blacker of the University of Delaware author of the new book The Falling Rate of Learning and the Neoliberal Endgame explains the roots of modern primary education in the United States, why changes in capitalist production drive education policy, what is the falling rate of profit? Why being exploited under capitalism is better than being disposed of, what neo-liberalism is a symptom of, why universal education is longer needed for modern capitalism and why we are moving towards an economy of eliminationism."

Gaius Publius has posted the Moyers segment where he talks to Yves Smith and Dean Baker, calling it "an excellent, listenable primer on what TPP is and why it spells death to democracy (literally) and breathes even more life into the predator 1% of the 1%."

From The Hill, "Democrats plead with Obama to abandon Social Security cut." Note that this story is cast entirely in terms of the politics, rather than the effect of the policy on, you know, the country.

"Supreme Court Denies Family Farmers the Right to Self-Defense From Monsanto Lawsuits: The U.S. Supreme Court today issued a decision in the landmark federal lawsuit, Organic Seed Growers and Trade Association (OSGATA) et al v. Monsanto. Farmers were denied the right to argue their case in court and gain protection from potential abuse by the agrochemical and genetic engineering giant, Monsanto. Additionally, the high court decision dashes the hopes of family farmers who sought the opportunity to prove in court Monsanto's genetically engineered seed patents are invalid. [...] 'This high court which gave corporations the ability to patent life forms in 1980, and under Citizens United in 2010 gave corporations the power to buy their way to election victories, has now in 2014 denied farmers the basic right of protecting themselves from the notorious patent bully Monsanto,' said Gerritsen. "

Randall Wray on The Greatest Myth Propagated About The FED: Central Bank Independence is worth reading for clarification. There's also an interesting little parenthetical at the end: "(To be clear, we have 4500 honest banks. We have a half dozen huge banks that are run as control frauds. Our financial system's main problems can be found among those SDIs - systemically dangerous institutions. We will not get back our economy or our government until we close them.)"

"7 Reasons Why You Should Stop Bitching About People On Benefits" - They left out the best reason, though: We're talking about people who have to spend their money, which creates demand, which creates jobs. That's a lot more productive use of your money than most of the ones politicians come up with.

Yes, the only thing missing from the Christie saga was... The Boss. (I laughed out loud.)

Ted Rall: "War is a Force That Gives Us Meaninglessness"

A really touching use of photoshop