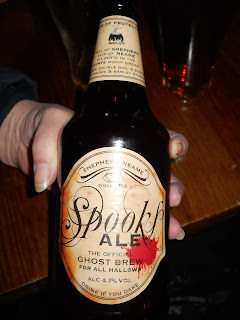 We saw this seasonal beer at the pub last week. Too hoppy for my tastes but with a lot of nice flavor, anyway.

Digby and Stuart Zechman were this week's guests on Virtually Speaking Sundays, and discussed the austerity zombie, this time in response to Gene Sperling's remarks about the "necessity" of "entitlement" cuts. Stuart also provided some insight into large software development projects involving multiple participants referring and why the PPACA is such a pig of a project.

Just learned that Robert Silverberg had a heart attack here in London, but he seems to be okay. Nothing on File 770 or Locus yet, but Pat Cadigan is on the scene and John Clute confirms on Twitter.

Good on Atrios for being one of the very few people who all along has been saying that inflation can be too low - and it is.

Ian Welsh's recent post "A brief note on why the progressive blog movement failed" generated some lively discussion among members of the early liberal blogosphere, including a post from MyDD founder Jerome Armstrong that Ian promoted as a separate post, "Jerome Armstrong on the Failure of the Netroots". I'm not sure how Jerome sees a coalition with Libertarians (or the libertarian right) doing any good (assuming it can happen in any substantive way at all), but I don't think it's wise for liberals to automatically discount any action in concert with them when our interests coincide. Alan Grayson and Ron Paul got the Fed audited, which is a very good thing, regardless of how many crackpot ideas Paul may have. I think liberals make a grave mistake when they sneer at Jane Hamsher because she once co-signed a letter with Grover Norquist - a letter calling for Rahm Emanuel's resignation. Is there really any liberal who doesn't think getting Emanuel and people like him out of government is a good idea?

Glenn Greenwald schools Bill Keller: "So yes: along with new privacy-enhancing technologies, I do think that brave, innovative whistle-blowers like Manning and Snowden are crucial to opening up some of this darkness and providing some sunlight. It shouldn't take extreme courage and a willingness to go to prison for decades or even life to blow the whistle on bad government acts done in secret. But it does. And that is an immense problem for democracy, one that all journalists should be united in fighting. Reclaiming basic press freedoms in the U.S. is an important impetus for our new venture." And Keller tries to defend David Brooks.

"The Strange Silence [...] It is pointless to tell these 'fans' [of Obama] that there is nothing wrong with criticizing the president and his policies. It doesn't make you the grand master of the local KKK or mean that you've failed Martin Luther King Jr. In fact, I might even go out on a limb to suggest that the reason Bill Clinton gets so much negative attention from these 'fans', in spite of the fact that his record is more liberal than Obama's, is because these 'fans' are projecting their pent up frustration on a legitimate white target as a proxy. They simply cannot overcome their fear of ostracism if they criticize the president in the strong terms they would like to use. Just thinking about it makes them feel uncomfortable and oogy. This is ridiculous but it appears to be useless to point out that if people on the left don't get over this conditioned Pavlovian response (courtesy of Obama's campaign strategists) they are condemning their side to complete and utter fecklessness and continued perceptions of ineptitude. But I might suggest that this is exactly what the bad guys want. If you don't raise a fuss, no effective regulation gets implemented and ideas that benefit most of the people in America never see the light of day and are considered politically impractical by the savvy people."

Michael Lind is an idiot if he really believes this nonsense about the Tea party. The Tea Party, like the rest of the Republican Party and like the Democratic Party, has two tiers, one led and funded by crackpot billionaires, and the other made up of all of the other people who probably would kill their own leaders in their beds if they ever tumbled to what they are really up to. There is no great distinction in the leaderships (all three of which are in some part funded by the same crackpot billionaires), and the distinctions in the rank and file are trivial compared to their areas of agreement. One group is not distinctly richer or poorer or crazier or saner or better educated or less educated, despite whatever fudging of trivial percentages Lind tries to fan into significance. Right-wing populists believe that "the government" is the problem, while liberal populists believe that the people leading the government (and the rich creeps who bribe them) are the problem, but there is remarkable agreement between most Tea Partiers and most liberals that the government should serve the people, that Social Security and Medicare/Medicaid should not be cut, and that a lot of elite creeps are wrecking our country. Lind's piece is just another sample of Let's-you-and-him-fight crap meant to buttress tribalistic hatreds between the two groups. This is not the antebellum south, and if people don't stop buying this nonsense, trust me, liberals are being just as hateful and unreality-based as their counterparts on the right.

Delicious: "Activist Tweets Former NSA Chief's ‘Off Record' Phone Call On Train." Sometimes, when I'm on a train and some creep in a suit is talking too loud on his phone, I have a little fantasy that he's about to spill some corporate secret in my hearing. This one is even better - Michael Hayden bragging about torture and rendition in the hearing of a guy from MoveOn.org.

CMike says: "Ordinarily I don't have much patience for prescription-less rants but I listened to this one to the end and then I listened to it again." Jeremy Paxman interviews Russell Brand and proves that Paxman is as fatuous and trivial as ever, but Russell Brand is not. Christopher Goodfellow sees real potential in Brand, and provided the highest praise: "The comedian's appearance before a home affairs select committee about drugs last year was also worthwhile. Amid the humorous comments about chairman Keith Vaz were lucid and informative statements on an issue he takes seriously. It all adds up to a level of engagement by a political satirist/stand up comedian that not even Bill Hicks ever reached."

A bunch of Dems introduced a bill [...] "The proposed law holds the Supreme Court to the same standards required of judges in the federal court system. Currently, Justices on the Supreme Court decide for themselves if they should recuse themselves from cases in which they may have a personal stake or in Thomas' case, his wife has a political or financial stake as a holy roller in the Tea Party." Well, that's closing the barn door after the horses are gone, innit?

David Dayen in The Pacific Standard: "How a Frustrated Blogger Made Expanding Social Security a Respectable Idea: Thanks to decades of stagnant wages and the Great Recession, more than half of American working-class households are at risk of being unable to sustain their standard of living past retirement. Duncan Black is trying to change that."

America: The Best at Being Worst

I sure wish there were a DVD set available of all of the episodes of Steve Allen's Meeting of Minds.

That neat Honda ad and how they did it

This picture is strangely funny and yet disturbing.

Google Street View and some nice views of Tower Bridge (aka "the one that everyone thinks is London Bridge, but isn't").

"Sunday Morning", live.
And this is the album that we heard from across the hall the night I lost my virginity.

Roz wrote a poem for the occasion, and I knew from the first line when I first saw it sans title what it was about:
"He watched them dance their lives."

"I'm Waiting For the Man"