'Cause how could anything ever go wrong? 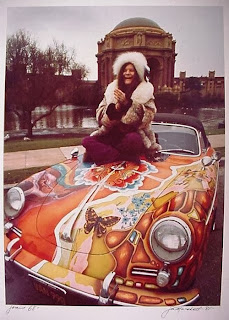 This photo of Janis on her (formerly oyster white) 1965 Porsche 356c Cabriolet that Dave Richards repainted with what he called "the history of the universe" was stolen from Bartcop.com.

Tonight's panelists on Virtually Speaking Sundays will be Marcy Wheeler and David Dayen, which should be really good - two of the best reporters anywhere if you want to know what's really going on. (And well, well, our very own Marcy Wheeler has been profiled in Newsweek: "Wheeler, known to her Twitter followers and readers as emptywheel, pores over government memos, transcripts and court opinions in an upstairs room in her home in Grand Rapids. Bookshelves hold the thousands of pages she's read over the years and often returns to when piecing together her investigations.")
Bruce Schneier was last week's guest on Virtually Speaking with Jay Ackroyd, and he talked about just how much the NSA has damaged the internet - among other things. It's about power, as Bruce also said in his TED talk.
Last Sunday, Cliff Schechter talked with David Neiwert on Virtually Speaking.

I can't recommend Aimai's "The Punishers Want To Run The Country or We Are All Tipped Waitstaff Now" enough. In it, she draws a pretty direct line between the conservative antipathy toward federal workers and the practice of tipping as a means to reward or punish (that doesn't actually work). What she left out is the magic word "aristocracy", here represented as a belief that money should buy you superiority over people you are in a position to punish, and the desire to be in that position. "The Restaurant customer, and I'd argue many Americans, don't respect work or workers and see situations in which they are served by a worker as a kind of passion play in which the served get to experience the power of the purse, the power of the john vis a vis the prostitute, the power to coerce service and specifically the power to punish one person for disappointment or bad service or really anything the tipper wants to punish that person for. More than that: Americans see tipping as an occasion to right the wrongs of a situation and to restore a balance--a balance that is upset when one person (the client) expects something good and gets something they didn't want" (via)

"Plutocrats at Work: How Big Philanthropy Undermines Democracy [...] One hundred years later, big philanthropy still aims to solve the world's problems - with foundation trustees deciding what is a problem and how to fix it. They may act with good intentions, but they define 'good.' The arrangement remains thoroughly plutocratic: it is the exercise of wealth-derived power in the public sphere with minimal democratic controls and civic obligations. Controls and obligations include filing an annual IRS form and (since 1969) paying an annual excise tax of up to 2 percent on net investment income. There are regulations against self-dealing, lobbying (although 'educating' lawmakers is legal), and supporting candidates for public office. In reality, the limits on political activity barely function now: loopholes, indirect support for groups that do political work, and scant resources for regulators have crippled oversight. Because they are mostly free to do what they want, mega-foundations threaten democratic governance and civil society (defined as the associational life of people outside the market and independent of the state). When a foundation project fails - when, say, high-yield seeds end up forcing farmers off the land or privately operated charter schools displace and then underperform traditional public schools - the subjects of the experiment suffer, as does the general public. Yet the do-gooders can simply move on to their next project. Without countervailing forces, wealth in capitalist societies already translates into political power; big philanthropy reinforces this tendency. [...] Despite scores of studies, the relationship of charitable giving to tax incentives remains unclear. Too many different factors determine giving: religiosity, innate altruism, family tradition, social attitudes, community ties, alumni loyalty, fluctuations in income. But other patterns of giving are well known. Less than 10 percent of all charity in the United States addresses basic human needs. The wealthiest donors devote an even tinier portion of their giving to these needs. Most major donations go to universities and colleges, hospitals, and cultural institutions, often for highly visible building projects carrying the donor's name."

"Yes, for the Millionth Time: You Can Be Fired for This [...] Regardless of what buttons are being set off by this guy, the story just confirms a point some of us have been making over and over again: the American workplace is one of the most coercive institutions around. It's a place where, whatever the niceties and pieties of our allegedly tolerant culture may be, bosses and supervisors get to act out - and on - their most regressive anxieties and fears. It's a playground of cultural and political recidivism, where men and women (but more often men) are given the tools to inflict and enforce their beliefs, their style, their values upon their employees."

"One Nation Under Shutdown: Here's How Congress Is Hurting Your State." I actually don't even want to talk about this. It's an outrage that it's happening, but it's an outrage that Obama could put a stop to if he wanted to. He doesn't want to.

"Will the Affordable Care Act Make Health Care More Affordable?" - What's important about this article isn't what it's saying, but that Rand is saying it, which means it's what a lot of people are listening to.

It's the same story over here - The anti-sex people get professorships, government funding, and awards from the Queen. "In it for the money? The smart investment is in an anti-sex worker career."

"Everything You've Been Told About How to Eat Is Wrong."

Little did I know there was a Space Opera Society...

"Over 100 long-lost Doctor Who episodes found by dedicated fans - in Ethiopia."
And:Bigger on the inside

You knew that Steve Brust wrote a Firefly novel that you can download free here, right?

It's been a long time since I saw The Wizard of Speed and Time, but it's still pretty damned impressive. Made on film.