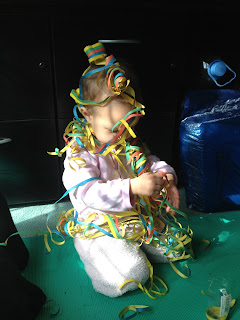 [In a departure from our usual practice, this is a photo of what happened when the local Baby Hurricane found the drawer where her parents keep the party streamers. I get hours of pleasure from other people's children.]

The other day I got a begging email from Campaign for America's Future telling me that Darrell Issa's report about the IRS was a put-up job - which is true - but including this warning:

Last Friday, Senate Leader Mitch McConnell accused the administration of a "coordinated effort to stifle free speech" as part of a "culture of intimidation."

This struck me as a classic example of how the right-wing starts the ball rolling in de-legitimizing legitimate criticism by using it for the wrong thing. Anyone who has watched the treatment of Occupy, whistle-blowers, and good investigative journalists knows that there really is a coordinated effort to stifle free speech being led by the administration that includes Bradley Manning levels of intimidation. But here we see the Republican Senate leader using those words to describe something that (a) the administration had nothing to do with and (b) didn't even happen in the first place.

The Republican leadership is, of course, just as committed to depressing democracy and stifling free speech as anyone in the White House is, so they aren't going to attack Obama for doing things that actually help accomplish that.

But isn't it funny how this quote from McConnell is being used by a Democratic group to discredit the very idea that there's a policy of stifling free speech being orchestrated by the White House? Why, it's almost as if Darrell Issa came up with this clever plan to make the very accusation sound demented.

The insane Republican leadership and the insane "centrist" Democratic leadership work very hard to protect each other so that they can all continue, in concert, to do things that most of the people in the country oppose.

They don't want you to know this, "But a mid-June poll of Texas residents showed that a majority of Texans oppose the abortion ban bill. The poll, conducted by the Democratic polling firm Greenberg Quinlan Rosner, found that 51 percent of Texans opposed the bill. Sixty-three percent of respondents said that Texas has enough abortion restrictions already, and 52 percent said they think that abortion should be legal in most or all cases. Seventy-four percent, including a majority of Republicans and Independents, felt that private medical decisions about abortion should not be made by politicians."

I worry a lot about how the Supremes have been using the "standing" issue to reject important cases. What some people don't understand about why Glenn Greenwald's and Jeremy Scahill's scoops are so important is not that it is something none of us knew, but rather that we now have documentation demonstrating that everyone has standing to bring suit - something the court had previously tried to deny. But these are precisely the grounds on which the Defense of Marriage Act (DOMA) was overturned. Here's Paul Waldman on "Why the Prop. 8 Decision Should Make Liberals Uneasy. (Understand, though, that it is entirely legitimate to say that the plaintiffs had no standing on Prop 8 - because they didn't. What's worrying is that the Supremes have had a habit lately of using this issue even where it is clearly inappropriate.)
Ari Berman on The Supreme Court's Constitutional Hypocrisy. Even Richard Posner (!) can't find any legitimate jurisprudence in the striking down of the Voting Rights Act (VRA).

Here's a Supreme Court decision no one was paying attention to, but John D. Echeverria at The New York Times says it was "A Legal Blow to Sustainable Development . The court handed down a decision on Tuesday that, in the words of Justice Elena Kagan, will 'work a revolution in land-use law.' While that may sound obscure, the decision in Koontz v. St. Johns River Water Management District will result in long-lasting harm to America's communities. That's because the ruling creates a perverse incentive for municipal governments to reject applications from developers rather than attempt to negotiate project designs that might advance both public and private goals - and it makes it hard for communities to get property owners to pay to mitigate any environmental damage they may cause."

"Don't Forget That the Supreme Court Just Allowed Workplaces to Become More Hostile [...] In the first case, Vance v. Ball State University, the court ruled workers only are protected against a supervisor who has the power to make 'significant change in [your] employment status, such as hiring, firing, failing to promote, reassignment with significantly different responsibilities, or a decision causing a significant change in benefits' or if the company ignores the fact a supervisor without this power is engaging in harassment. This very narrow definition of "supervisor" makes remedying harassment more difficult and ignores the reality that many supervisors without hiring and firing power have the ability to make an employee's life much more difficult. The second case, University of Texas Southwestern Medical Center v. Nassar, eliminated so called "mixed motive" retaliation claims under existing anti-discrimination law. Employees who pursue discrimination claims now will have to prove that discrimination was the sole thing on their boss's mind when they were fired or demoted. Previously, discrimination only had to be one factor involved in punishing an employee and bosses were required to reveal what they were thinking at the time of the punishment. As Justice Ruth Bader Ginsburg pointed out in her dissent, that standard is almost impossible to meet, since few people in the real world are motivated by a single cause."

"Americans Hate Their Jobs, Even With Office Perks" - It's hard to like a job where your boss is a jerk and your contributions are not recognized, even if you do have free access to the tennis court.

Passing the DREAM Act would have been a good thing, but the immigration bill they are talking about now is very definitely not the DREAM Act and no one should be sorry when it fails. Seriously, if they wanted to pass a good bill, they could, but what they've drawn up is one that will really make things worse.

McClatchy: "Memories of Stasi color Germans' view of U.S. surveillance programs: "BERLIN - Wolfgang Schmidt was seated in Berlin's 1,200-foot-high TV tower, one of the few remaining landmarks left from the former East Germany. Peering out over the city that lived in fear when the communist party ruled it, he pondered the magnitude of domestic spying in the United States under the Obama administration. A smile spread across his face. 'You know, for us, this would have been a dream come true,' he said, recalling the days when he was a lieutenant colonel in the defunct communist country's secret police, the Stasi." Someone fixed Obama's famous campaign cheer, too: "Yes we scan."
Also at McClatchy, a cartoon on the SCOTUS decision on Voting Rights.

Charlie Rose interviewed Alan Rusbridger and Janine Gibson, Guardian editors, about the NSA spying story, Snowden, and the importance of the story. My favorite part was right at the end where Rusbridger says he thinks Snowden felt comfortable contacting Greenwald because he is a lawyer, and he's "incredibly technical and careful", and therefore was most likely to treat it seriously.

Ted Rall: "PRISM Takeaway: Are We Citizens or Serfs? Should Obama Resign?"

"Park Avenue: Money, Power and the American Dream: In America, the rich are getting richer. Isn't that great? Doesn't that mean there's lots more wealth to go round? Or is it good news for the rich but very bad news for the poor? 740 Park Avenue, Manhattan, is one of the most exclusive addresses in the world, home to some of the richest Americans, the 1% of the 1%. Ten minutes to the north, across the Harlem River, is the other Park Avenue, in the South Bronx. Here, unemployment runs at 19% and half the population need food stamps. The American Dream of equal opportunities and hard work says you can be born in the Bronx and end up at 740. But is that dream still true? The film argues the super-rich haven't just bought the exclusive addresses - they've bought the whole system and they're running it for themselves. Watch the full documentary now - 59 min"

LarryE on the Supremes and the right to silence: "This decision is the product of diseased minds prepared to twist logic and law into any shape necessary to say "cops and prosecutors win" - and it is an outrage."

"Scandal and skulduggery at the Vatican: 'It's like the end of the Berlin Wall,' said a high-ranking Vatican official last week after an invisible financial barrier marking the legal separation between the Vatican and Italy was breached for the first time. According to officials at the Bank of Italy, the Institute for Works of Religion - the Vatican's own offshore bank - has for years been allowing organised criminals, even terrorists, to launder money with impunity."

Here are some photos from the Wendy Davis filibuster. But to get there I clicked on a blogad that used this image, and all I could think was, "What's wrong with this picture?"
"Is Ann Richards Smiling in heaven?"

Can you pass the Louisiana voter literacy test? (via)

Commenter ksix recently tipped us to an old article about how Adolph Ochs got his hands on The New York Times that's worth a look if you ever entertained the fantasy that it is, or was, a liberal newspaper: "How did Ochs, a virtual bankrupt from Chattanooga, persuade Wall Street to set him up with the moribund New York Times? Answer: The financiers were anxious to keep the paper alive as a Democratic voice against the populist Democratic candidate for president, William Jennings Bryan, who was stirring the masses with that speech about the Cross of Gold. Ochs bought a fine new suit, set up a fake bank account as reference, and persuaded J.P. Morgan and others to bankroll the purchase." (It would also be nice if all members of the Washington press corps, before they were ever allowed to write about anything, were locked in a room and forced to write over and over the reason why the NYT blew the Watergate story: "Bureau chief Max Frankel had been assured by his tennis partner Henry Kissinger that the White House was not involved.")

40 years ago, Jane Elliot taught her students about discrimination and privilege.

Just Fun Stuff - 8,000 beads on a chain do a really interesting thing.

Surf Monkeys, "Skyscraper Blues" (You can buy some here.)