In a time of possibilities 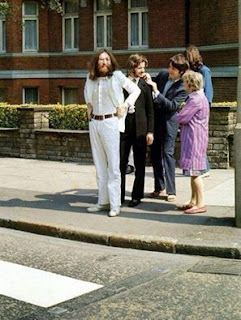 "Congress just passed a bill addressing police killings while no one was looking: After watching nationwide protests unfold against police brutality, members of Congress did what they have seemed incapable of doing for years: something. A bill passed by both chambers of Congress and headed to President Barack Obama's desk will require local law enforcement agencies to report every police shooting and other death at their hands. That data will include each victim's age, gender and race as well as details about what happened. 'You can't begin to improve the situation unless you know what the situation is,' bill sponsor Rep. Bobby Scott (D-Va.) told the Washington Post. 'We will now have the data.'"

"Fringe No More: Sanders Takes Major Lead in Key Battleground States [...] The new CBS/YouGov poll finds U.S. Sen. Sanders (Vt.) with 52 percent support among Democratic primary voters in New Hampshire, while former frontrunner Clinton receives 30 percent. 'Possibly more worrying for the Clinton campaign is her performance in Iowa,' writes YouGov US and UK assistant editor William Jordan - in that key caucus state, Sanders is now ahead by 10 points, with 43 percent to Clinton's 33 percent."
* Bernie makes the cover of TIME. Story: "The Gospel of Bernie: The man who brought fire back to the Democratic Party" - good title, 'cause that's about the size of it.
* Bernie visited The Late Show. I found this intro and his response to the important question of why he doesn't feel insulted when people call him a "liberal" and a "socialist".

Pelosi says the DNC "probably should" have more debates, but DNC doesn't care.

David Dayen at The Intercept: Wall Street Journal's Scary Bernie Sanders Price Tag Ignores Health Savings: The screaming headline on Tuesday's Wall Street Journal reads 'Price Tag of Bernie Sanders's Proposals: $18 Trillion.' This would comprise 'the largest peacetime expansion of government in American history,' the Rupert Murdoch-owned newspaper warns. [...] But how did the Journal arrive at $18 trillion? They added up the 10-year price tags of seven programs Sanders has endorsed in his candidacy for president. It turns out that $15 trillion of the $18 trillion, or 83 percent of the total, comes from just one of these programs: establishing a single-payer health care system. What the Wall Street Journal won't tell you is that $15 trillion in national health spending over 10 years would represent a massive savings for the United States. Right now we spend at twice that rate for health care. [...] Accounting for cost inflation in health care and extending that out for 10 years, on our current trajectory we would spend more than $30 trillion, compared to the $15 trillion of a single-payer plan, which would totally supplant it." (Jerry Friedman objected to having his figures misused by the WSJ.)
* "Andrea Mitchell Pushes Wall Street Journal Hit Job On Bernie Sanders" - not a surprise, but Bernie had no trouble responding to that one.
* Matt Yglesias is a concern troll. Listen, you putz, if Bernie Sanders betrays Democratic women the way McGovern did, you can bet he will lose. But as long as he keeps being Bernie Sanders, that's not an issue. Meanwhile, Sanders is accessible in ways that McGovern is not. There's no "nuance" to confuse people, he just says it plain. No one is going to accuse him of being "too cerebral" when he keeps right on talking like an ordinary person.
* A Pro-Clinton Super PAC Is Going Negative On Bernie Sanders: The group links Sanders to Venezuela's Hugo Chavez and the United Kingdom's new Labour Party leader, Jeremy Corbyn." (HuffPo) And "David Brock Declines to Apologize to Bernie Sanders Over Jeremy Corbyn Comparison: The founder of the pro-Clinton group Correct the Record said that the comparison the UK labor leader was 'standard opposition research'." (Bloomberg) But, "Sanders sees burst of fundraising after opposition research against him surfaces." (WaPo)
* What Corbyn actually said

USA Today admits Hillary Clinton email scandal is a sham
* Is the NY Times out to get Hillary Clinton?
* Clinton's support erodes sharply among Democratic women: "Her college plan was going to give people $17 a month, What is that? That's not even a pizza"
* Clinton uses Biden to defend bankruptcy bill vote: Democratic presidential candidate Hillary Clinton on Thursday said Vice President Joe Biden was part of the reason she backed a bankruptcy bill that liberals vehemently oppose. She was asked during a campaign stop in New Hampshire about a 2001 vote she made that was supported by the credit card industry, according to the Wall Street Journal. Consumer activists argued the bill would make it harder to consumers to hold credit card companies accountable. "It was Vice President Biden who was the senator from Delaware and the Republican co-sponsor that I was talking with, so I said I'd support it even though I'd opposed it before," Clinton said, according to the Journal. The bill did not end up passing, she added.
* "Hillary Clinton Goes to Militaristic, Hawkish Think Tank, Gives Militaristic, Hawkish Speech."

Charlie Pierce has a few words about the Republican debate.

Political Smearing: Project Islington
* Losing Their Grip: the Meaning of Corbyn's Win
* Pessimism after Corbyn [...] There is war coming in the Labour Party. Already, the bad-faith resignations and rumour-mongering of leading right-wingers signals the scale of resistance Corbyn will face. And that struggle will refract through its own institutional and ideological character the conflict that cleaves society as a whole, that between exploiter and exploited, between oppressor and oppressed. And the odds in that conflict remain stacked heavily in favour of the habitual victors. The Labour right have been caught off-guard, exhausted, and weakened by the loss of a major bastion of their power the size of Scotland. Ironically, the very processes of Pasokification that threaten the survival of Labourism as a serious force are also responsible for the chinks in the armour of the old guard, which have allowed Corbyn and his allies to make this audacious dash for power. But, also ironically, Corbyn's very victory, in its shattering of their complacent, internalised claim that There Is No Alternative (to them and their project), will galvanise the Labour right. They will not forgive this humiliation. Numb inertia is no longer their instrument: they will have to remember how to fight again. And remember they very soon will."
* Ian Welsh, "So, you supported Corbyn: here is what you MUST do if he is to survive and win
* Jeremy Corbyn's debut at Prime Minister's Question Time

New Mexico Court Orders Mother to Take Faith-Based Classes if She Wants Custody of Her Kids: Holly Salzman was ordered by a New Mexico district court to take conflict resolution classes stemming from a child custody case with her ex-husband. That sort of thing happens fairly often in these situations. The problem is that Salzman was told to see Mary Pepper (below), a Christian who pushed God on her during the court-ordered sessions. Pepper also turns out to be a freeloader who illegally holds her sessions in the public library and makes her clients collude in keeping her name off the arrangements and paying her under the table so she won't have to rent space for sessions.

"If You're From One of These Five States, You'll Likely Need a Passport for a Domestic Flight: Driver's licenses from New York, Louisiana, Minnesota, American Samoa, and New Hampshire will no longer be enough to get on a domestic commercial flight. The standard licenses from New York, Louisiana, Minnesota, New Hampshire, and American Samoa are considered 'noncompliant' with the security standards outlined in the Real ID Act, which was enacted back in 2005 but is being implemented in stages. Why are these specific licenses deemed sub-par? In these five states, getting a license doesn't require proof of citizenship or residency."

Nine police California officers arrested a black teenager and slammed him onto concrete while apparently arresting him for jaywalking.

Glenn Greenwald, "Arrest of a 14-Year-Old Student for Making a Clock: the Fruits of Years of Fear-Mongering and Anti-Muslim Animus"

"Desperate Elephants Shot With Poison Arrows Travel To Humans For Help ." I find it remarkable that they knew to go somewhere they had never been before in search of aid.

Video on the first showing of Banksy's Dismaland

"The World's Most Beautiful Library Is In Prague, Czech Republic."

The lost legacy of David Ruffin