They decide and the shotgun sings the song 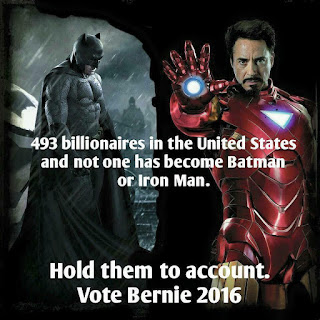 They told me the radiation treatments would make me tired. They did. On the last day, they said, "It'll get worse before it gets better." They were right, but they didn't tell me how much worse. It's like my entire body is in open rebellion. Also, alien skin. Yikes. I really gotta post these links before it's suddenly September.

Stuart Zechman was on Virtually Speaking with Jay Ackroyd to discuss The Liberal Policy Agenda and popular politics.

Apparently, Barney Frank wants me to support Hillary because William Kirstol is always right. Barney Frank is tight with the banksters, you know. The only trouble with this formula is that there is plenty of reason to believe that Hillary can't beat the Republican nominee, but Bernie can. And Bill Curry at Salon figures Bernie to win the nomination. The polls are not with Hillary.

Something strange happened at Netroots Nation. To set the scene for this, you need to know that a panel that immediately preceded the Incident was about police violence and that, of course, Bernie Sanders has talked about it all the time and in fact had done so twice in the preceding week. Bernie objected to the Clintons' Tough on Crime policies back in the day and has never changed his mind about it. So then up comes the event where two presidential candidates are supposed to address the crowd, and Jose Antonio Vargas had just asked Martin O'Malley about the sharp rise in arrests of black young people in Baltimore during his administration. So, you can understand the surprise of those in attendance when a bunch of black activists came in and appeared to accuse those present of "ignoring the issue" of police violence. Oliver Willis was not impressed. Sanders arrived at the event mere moments before he was supposed to go on stage and had no idea what had been going on; he reacted to the heckling that never let up much the same way he usually reacts to white hecklers. I'm told there was actually a lot of local infighting involved that no one from outside of the area would necessarily have been prepared for. Yes, Sandra Bland's death after a traffic stop raises lots of questions, but I'm not sure repeating a Twitter tag or even her name really addresses that. It did seem to some that it was really self-promotion. The Young Turks report. Josh Holland interviewed Charles Lenchner, co-founder of People for Bernie Sanders, and Imani Gandy, AKA @AngryBlackLady, separately on his podcast. Meanwhile, nothing has stopped the cops from making up silly stories "explaining" Bland's death, and there's still no explanation for her illegal arrest. Finally, Chuck Todd tried to sell the narrative but Bernie wasn't sitting still for it.

Elizabeth Warren's speech at Netroots Nation 2015
How Politico reported it

Warren is pushing to reinstate Glass-Steagall, but Hillary doesn't seem interested. She should be. "To this day some Wall Street apologists argue Glass-Steagall wouldn't have prevented the 2008 crisis because the real culprits were nonbanks like Lehman Brothers and Bear Stearns. Baloney. These nonbanks got their funding from the big banks in the form of lines of credit, mortgages, and repurchase agreements. If the big banks hadn't provided them the money, the nonbanks wouldn't have got into trouble. And why were the banks able to give them easy credit on bad collateral? Because Glass-Steagall was gone."
But it sounds like Marcy Kaptur's bill to restore Glass-Steagall is better than Warren's. In fact, it's curious that Warren's bill doesn't have these virtues.

Radley Balko enlisted attorney Nathan Burney, "author of The Illustrated Guide to Criminal Law, to draw up some cartoons to help explain some of the more complex issues in this area of the law." In this cartoon, "What is 'qualified immunity,' and how does it work?"
And on a related subject, the Dyller Law Firm on False Or Wrongful Arrest Or Malicious Prosecution.

Conservatives started attacking the Iran deal long before they had any idea what it was going to be, mainly because they think war is a good answer to everything. They still haven't read it but they are talking like Iran and Obama got together and bombed Pearl Harbor. The Rude Pundit knows what it's about, and here's Fred Kaplan's view of Why Israel, Saudi Arabia, and Neocons Hate the Iran Deal. Just knowing they hate it is a good enough reason to be hopeful. Funny how neocons never mind holding hands with Saudi Arabia, the country that exports extremist Wahabism all over the world, resulting in minor inconveniences like 9/11. (Not sure whether you can still get Nicole Sandler's interview with Alan Grayson about his concerns about the Iran deal, but you can try here.)

Digby at Salon, "The quiet Social Security revolution: How Democrats learned to stop loving benefit cuts. Duncan Black may turn out to be the hero of the 21st century.

Froomkin, "Justice Department Watchdog Complains He's Been Curbed: The Justice Department’s internal watchdog said Thursday that his independence has been undermined by the department’s refusal to let him see information derived from wiretaps or national security letters without special permission. The department’s Office of Legal Counsel issued a 68-page opinion Thursday saying that Inspector General Michael E. Horowitz’s office should not be granted access to several different kinds of typically confidential material unless there is a clear law-enforcement or counterintelligence purpose - and that the department’s lawyers, not the inspector general’s, would make that determination. That would appear to rule out many of the typical goals of oversight, such as rooting out fraud, incompetence, rule-breaking and cover-ups."

UK Police Confirm Ongoing Criminal Probe of Snowden Leak Journalists: A secretive British police investigation focusing on journalists working with Edward Snowden’s leaked documents remains ongoing two years since it was quietly launched, The Intercept can reveal. London’s Metropolitan Police has admitted it is still carrying out the probe, which is being led by its counter-terrorism department, after previously refusing to confirm or deny its existence on the grounds that doing so could be 'detrimental to national security.'"

Some days it just seems like Obama is taking the piss. It's bad enough they claim all these trade deals will "create jobs", which of course they won't, but they tacitly acknowledge that they will destroy jobs when they start talking about "trade adjustment" to give meagre help to those who lose jobs. And then insist we have to pay for it (even though hardly anyone will need it!)... out of Medicare! William Rivers Pitt on Killing a Nation With Euphemisms: TPP-Eats-Medicare Edition.

McKinney Police Chief says cop who attacked girl at pool party was out of line, fails to defend him.

I was dismayed to see people who should know better asserting that Donald Trump is the craziest clown in the GOP clown car. Leaving aside that these people clearly haven't noticed Cruz and Santorum, I have evidence that Trump is less crazy than most of the Democratic leadership, right here. A Democratic president should have said that years ago, dammit.

The Young Turks got together with Amex, interestingly, to make a documentary about the finances of the poor, Spent: Looking For Change. Being poor is expensive.

"Class vs. Special Interest: Labor, Power, and Politics in the United States and Canada in the Twentieth Century" - or why American pundits' explanation of the decline of unions is all wrong.

I need to stick Stirling Newberry's website, The Sorcerer's Apprentice, over on my sidebar, as soon as I can remember how.

A generous gift from Ursula Le Guin to the writing community

Apparently, it's the return of Bloom County.

And, apparently, the Lone Gunmen are coming back from the dead!

Mr. Peabody adopts Sherman and invents the Wayback; plus, Rapunzel

Fred Astaire and Gene Kelly - together.

The Who live, 1978, final performance with Keith Moon, "Won't Get Fooled Again"