Stuff that happened, stuff they said 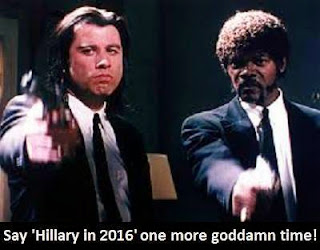 Avedon Carol and Dave Johnson were panelists on this week's Virtually Speaking Sundays, discussing perpetual war, climate change, and whether Hillary Clinton should be a candidate for president. Background includes this article on shopping for homes that won't be washed out by climate change. And here's two recent articles by Dave, "The Extortion Game Corporations Play To Cut Their Tax Bill" and "Voters Will Oppose Politicians Who Support 'NAFTA-Style' Trade Deals".
On Thursday's Virtually Speaking: "Gaius Publius & RJ Eskow explore[d] the consequences of Democratic party leaders' continued espousal of unpopular positions in a time of progressive change. What does the New York Democratic primary battle tell us? What does it mean for the party in 2016?"

On Wednesday of last week, the 6th U.S. Circuit Court of Appeals upheld a lower-court ruling that expanded the state's early-voting period by a week, and added weekend and evening hours leading up to the Nov. 4 election. But that could still change because Secretary of State Jon Husted is appealing the decision by a three-judge panel to the full appellate court, based in Cincinnati.

This American Life, "The Secret Recordings of Carmen Segarra: An unprecedented look inside one of the most powerful, secretive institutions in the country. The NY Federal Reserve is supposed to monitor big banks. But when Carmen Segarra was hired, what she witnessed inside the Fed was so alarming that she got a tiny recorder and started secretly taping." Bloomberg seems to think this is an important revelation about regulatory capture.

The public isn't as stupid as some people would have you believe: "He cites specific states, such as Colorado, where data 'shows that the Koch brothers have a net favorability of negative 14 percent among all likely voters.' The issue is being used to push against Republican Senate hopeful Cory Gardner there. In Michigan, where Koch-aligned groups recently stopped running ads, the Kochs are at a negative 23 percent favorability, according to the memo. And in Iowa, 71 percent of likely voters said they were 'less likely to support a candidate if he or she was being bankrolled by the Koch brothers.'" It's amazing how smart people get once they are kept informed. Gee, I wonder if this could work for Democrats who want to promote good policy... Oh, wait, first they would have to want to promote good policy. Now, if we could just get people informed about how regressive their state and local taxes are....

"Largest City In Vermont Now Gets All Its Power From Wind, Water And Biomass: The 42,000 people living in Burlington, Vermont can now feel confident that when they turn on their TVs or power up their computers they are using renewable energy. With the purchase of the 7.4 megawatt Winooski One hydroelectric project earlier this month, the Burlington Electric Department now owns or contracts renewable sources - including wind, hydro, and biomass - equivalent to the city's needs. " See? It's not that hard.

"Inside the Koch Brothers' Toxic Empire: he enormity of the Koch fortune is no mystery. Brothers Charles and David are each worth more than $40 billion. The electoral influence of the Koch brothers is similarly well-chronicled. The Kochs are our homegrown oligarchs; they've cornered the market on Republican politics and are nakedly attempting to buy Congress and the White House. Their political network helped finance the Tea Party and powers today's GOP. Koch-affiliated organizations raised some $400 million during the 2012 election, and aim to spend another $290 million to elect Republicans in this year's midterms. So far in this cycle, Koch-backed entities have bought 44,000 political ads to boost Republican efforts to take back the Senate. What is less clear is where all that money comes from. [...] But Koch Industries is not entirely opaque. The company's troubled legal history - including a trail of congressional investigations, Department of Justice consent decrees, civil lawsuits and felony convictions - augmented by internal company documents, leaked State Department cables, Freedom of Information disclosures and company whistle­-blowers, combine to cast an unwelcome spotlight on the toxic empire whose profits finance the modern GOP."

"Naomi Klein's New Book Is a Manual for a Movement"
Naomi Klein: 'We Can't Dodge This Fight' Between Capitalism and Climate Change [...] In This Changes Everything: Capitalism vs. the Climate, she explores the failures of 'Big Green' environmental groups and supposedly benevolent CEOs, the right-wing climate deniers who actually understand the stakes of climate change better than many progressives, and the grassroots movements coalescing to fight climate change. Klein spoke with In These Times from her home in Toronto."

"Court rules Wal-Mart must compensate workers: OTTAWA, Ontario (AP) - Canada's Supreme Court ruled Friday that Wal-Mart must compensate former workers at a Quebec store that was closed after they voted to become the first Wal-Mart store in North America to unionize. [...] The court ruled in a five-to-two decision that the world's largest retailer modified working conditions for the employees without a valid reason when it shut down. The court ruled an arbiter will determine appropriate reparations, possibly with damages and interest. The store never re-opened."

"Pelosi's Worst Mistake Comes Back To Plague House Democrats: From the moment Nancy Pelosi announced she was reappointing failed Blue Dog Steve Israel to be DCCC Chairman again, it was apparent to anyone who pays attention that the Republicans had nothing to worry about in regard to losing the House majority. Once Israel started announcing his recruits-- garbage conservative Democrats in unwinnable red districts like anti-Choice, antigay,/pro-NRA, pro-fracking Jennifer Garrison in OH-06 and a trio of CIA stooges from Michigan and Pennsylvania the agency is trying to use to infiltrate Congress."

"How Dangerous is Being a Cop in the US? [...] On average a police officer dies in the line of duty in the US about every 55 hours (everything you need for this calculation is above so I'm not going to insult your intelligence by including it). On average a police officer kills a civilian (about 400 annually) about every 22 hours. So I think we have more to worry about from them than they do from us."

"Policing for Profit [...] FBI agent and researcher Gregory Vecchi and criminal justice professor Robert Sigler note, '[W]hat is evident from their behavior is that federal, state, and local governments use assets forfeiture to generate revenue, despite their claims otherwise.' For example, the U.S. Attorney General stated in 1990, 'We must significantly increase forfeiture production to reach our budget target. Failure to achieve the $470 million projection would expose the Department's forfeiture program to criticism and undermine confidence in our budget predictions. Every effort must be made to increase forfeiture income in the three remaining months of fiscal year 1990.'"

Extract from Richard Vague's The Next Economic Disaster: Why It's Coming and How to Avoid It at Naked Capitalism, "How Private Debt Strangles Growth, Stokes Financial Crises, and Increases Inequality [...] The primary issue is not public debt but private debt. It was the runaway growth of private debt - the total of business and household debt - coupled with a high overall level of private debt that led to the crisis of 2008. And even today, after modest deleveraging, the level of private debt remains high and impedes stronger economic growth. Rapid private debt growth also fueled what were viewed as triumphs in their day - the Roaring Twenties, the Japanese 'economic miracle' of the '80s, and the Asian boom of the '90s - but each of these were debt-fueled binges that brought these economies to the brink of economic ruin."

"Bernie Sanders: Longterm Democratic strategy is 'pathetic' [...] People are furious about it. We have a very conservative Senate and House. Congress is dominated by large campaign contributors who exercise enormous influence. I think, the people here [in Washington] have almost developed an instinct not to attack the people who put money into their coffers. Obviously the Republicans are beholden to these guys. But too many Democrats are nervous about talking about issues including income and wealth inequality. But in fact, the American people absolutely want to hear about it. I talk about it all the time. I give a lot of speeches and large crowds come out. People are very, very concerned about the overall impact of income and wealth inequality in terms of morality, in terms of economics, in terms of - with Citizens United - what it means to our political system."

"Why is 2 percent the Federal Reserve's inflation target? Because it is." And there is definitely a bias in favor of suppressing wages - and jobs.

"Who Stole Television News? [...] In 1978, Roone Arledge, then President of ABC Sports was also made President of ABC News. In an instant television news went from broadcast journalism to "the thrill of victory and the agony of defeat." This winners and losers mindset became the narrative model. And behind the scenes, TV station owners injected the influence of the yet-not-public Powell Memo into the bloodstream of network and local news."

When I first saw the Qwerkywriter, I instantly thought, "I want one!" But that was when I'd been up too late. In the cold light of day, I realized that, cosmetic or not, that carriage return was gonna drive me nuts forever.

A long, long time ago, I heard this "Memphis Blues" for the first time at the Memphis Blues Festival and it was my first clue about how the blues was banned on Beale Street.