You got me so I don't know what I'm doing 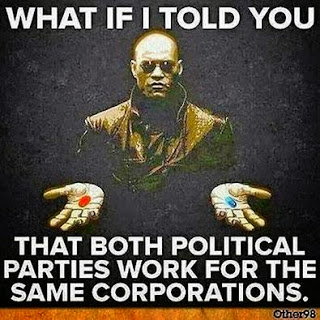 Dave Johnson and Jay Ackroyd were this week's panelists on Virtually Speaking Sundays, talking about the trade deficit, tax extensions vs infrastructure bank, profit repatriation and the $2 trillion held offshore.

Cecily was found guilty - A strange man reached around Cecily McMillan and grabbed her breast - something any normal person would recognize as a sexual assault. Cecily elbowed him back, which is pretty much what any normal woman would do. Manhattan DA Cy Vance prosecuted Cecily for assaulting an officer, since the molester turned out to be a plainclothes cop. The judge suppressed evidence and prejudiced the jury.

From Yves Smith at Naked Capitalism:
"No Evidence Justice Department Will Prosecute U.S. Banks Responsible for Financial Crisis: "Bill Black is in particularly fine form in this Real News Network video. Black recounts the various excuses for not prosecuting the parties that blew up the global economy, and gives a new one from the Justice Department: that regulators told them that yanking bank charters would blow up the global economy. Of course that's a straw man; Black and others who've been serious about prosecution have stressed the importance of targeting individuals. [...] In case you've got friends and colleagues who'd like better talking points as to why the banks (or more accurately banksters) got away with murder, this segment is a great place to start."
"SEC Official Describes Widespread Lawbreaking and Material Weakness in Controls in Private Equity Industry: At a private equity conference this week, Drew Bowden, a senior SEC official, told private equity fund managers and their investors in considerable detail about how the agency had found widespread stealing and other serious infractions in its audits of private equity firms. In the years that I've been reading speeches from regulators, I've never seen anything remotely like Bowden's talk. I've embedded it at the end of this post and strongly encourage you to read it in full. Despite the at times disconcertingly polite tone, the SEC has now announced that more than 50 percent of private equity firms it has audited have engaged in serious infractions of securities laws.

Amazingly, Politico actually published a piece by David Dayen, and while it doesn't pack the punch of most of his stuff, it does say you already know what kind of self-serving claptrap to expect from one of the architects of America's economic catastrophe and what you should read first: "What Timothy Geithner's New Book Won't Tell You: Don't accept the former Treasury secretary's account without reading Elizabeth Warren's take on all the people he left behind."

"Majority Of U.S. Millionaires Say They Should Be Taxed More To Reduce Inequality: In one of the first surveys of its kind, a CNBC poll has revealed that 51% of millionaires in America believe that inequality is 'a major problem', and nearly two-thirds advocate being taxed at a higher rate. [...] One of the most surprising findings was that a tiny minority, just 6%, believe that poor people do not work as hard as the rich." I'm guessing that you'd get a different result from a survey of billionaires.

"Lopsided Approach to Wall Street Fraud Undermines the Law: After the failures that led to the financial crisis, many taxpayers expected that the government would take a hard stance against those who had committed egregious violations." But something else happened....

Glenn Greenwald highlights a quote, saying, "Larry Summers explains Washington to Elizabeth Warren in one sentence:" - and the quote is from "The Warren Brief" in The New Yorker and looks like this: "In the spring of 2009, after the panel issued its third report, critical of the bailout, Larry Summers took Warren out to dinner in Washington and, she recalls, told her that she had a choice to make. She could be an insider or an outsider, but if she was going to be an insider she needed to understand one unbreakable rule about insiders: 'They don't criticize other insiders.'"

Bill Moyers, "Is Net Neutrality Dead? [...] For most Americans, they have no choice for all the information, data, entertainment coming through their house, other than their local cable monopoly. And here, we have a situation where that monopoly potentially can pick and choose winners and losers, decide what you see"

Regular listeners of The Majority Report know that Sam Seder takes great delight in getting calls from libertarians and challenging them to make their case. And from time to time people suggest to him that he ought to have someone on the show as a guest who is a bit more coherent than some of the libertarian callers (nearly all of whom seem to have issues with their telephones). So it came to pass that someone recommended an actual College Professor to debate him, and...it wasn't any better than random wankers, except for the comedy of him expecting Sam to behave like a student listening to a lecture instead of treating it like it was, you know, his own radio show.

Glenn Greenwald on "Keith Alexander Unplugged: on Bush/Obama, 1.7 million stolen documents and other matters" - This long "interview" with the recently retired NSA chief generated many quotes, and gave Glenn plenty of meat to get into: "There are few things in life more ironic than being accused by U.S. Generals, including those who participated in the war in Iraq, of being responsible for the loss of lives. For that sort of irony, nothing will beat that episode where the US Pentagon chief and Chairman of the Joint Chiefs of Staff announced that WikiLeaks - not themselves, but WikiLeaks - has 'blood on its hands' by virtue of publishing documents about the U.S. war in Afghanistan. In the world of the U.S. National Security State and its loyal media, those who go around the world killing innocent people over and over are noble and heroic, while those who report on what they do are the ones with 'blood on their hands'."

Digby posted a good little discussion on Twitter between Glennzilla and Billmon about the new anti-Russia hatefest. Here's one from Glenn I quite liked: "Yep - been a neocon tactic for years (save the gays by bombing Iran! - war in Afghanistan for the women!) - it's working well here."

A quick history of racial policy in America - clip from the half-hour documentary Legalize Democracy, which you can watch in full for free.

This cartoon made me think of Obama's speeches.

I apologize for this animated .gif.

Somebody make me a framed copy of this for my wall.

The papers loved the musical about The Kinks.

"You Really Got Me", live