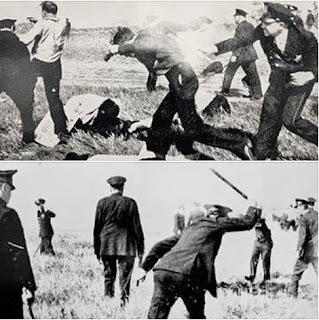 I meant to have posted this piece from the Bread and Roses page earlier, but I didn't get around to it. They're on Facebook, which many people are justifiably allergic to, so here's the full text:

"We are coming up on the anniversary of the MEMORIAL DAY MASSACRE - one of the bloodiest days in labor history: On May 30, 1937, outside Republic Steel in Chicago, heavily armed police and company thugs attacked workers and their families with impunity, as they peacefully marched across a field to picket at the steel mill after a holiday picnic. At the time, mill owners were refusing to recognize the Steelworkers union. Many workers were shot in the back, others were beaten while bleeding and on the ground. Police bullets killed four marchers right away; six more would die from their wounds. Thirty more people were seriously wounded, with 100 more clubbed by police. Nobody responsible was ever prosecuted and newspapers called the massacre 'a labor riot', claiming it was led by 'Red Chiefs' and a 'Mexican Army.' Mill bosses and their govt. supporters suppressed film footage of the event. The U.S. Senate eventually held hearings on what happened that revealed most strikers were shot in the back while fleeing."

Michael Kinsley has turned into the cranky old man who gets trotted out to yell at the kids, I think. But he started down that road a while ago, and I don't suppose we should be surprised that he came out waving his golf club at Glenn Greenwald. Still, it's always bizarre to see a journalist advocating giving the government veto power over what the press can publish and suggested that somehow prior restraint is preferable to letting Glenn Greenwald decide that he's got a story the public needs to hear. So you would expect lots of journalists - especially those who supposedly have liberal credentials - to be recoiling in horror. I just hope we can put to bed once and for all the fantasy that any of these people are part of anything liberal. Oh, but that Glenn Greenwald, he just makes those "liberals" So mad!

Las Vegas cop cleared after shooting unarmed man [...] This is the consequence when we put a premium on officer safety, giving it more value than the rights and safety of citizens. When I was researching my book, I talked to Neil Franklin about this. Franklin is a former Maryland state trooper, a former narcotics cop and was once in charge of curriculum at the Maryland State Police Academy. 'I think there are two critical components to policing that cops today have forgotten,' Franklin told me. 'Number one, you've signed on to a dangerous job. That means that you've agreed to a certain amount of risk. You don't get to do start stepping on others' rights to minimize that risk you agreed to take on. And number two, your first priority is not to protect yourself, it's to protect those you've sworn to protect. But I don't know how you get police officers today to value those principles again. The 'us and everybody else' sentiment is strong today. It's very, very difficult to change a culture.'"

The Washington Post continues to be a voice for the warmongers, and Charles Pierce has a rather good rant about Fred Hiat's War.

On the other hand, good on the NYT for looking at The Price of a Sex-Slave Rescue Fantasy. It's very difficult to get across to people that the figures we have are unreliable and usually heavily inflated. Not to mention the people who just make stuff up. It's even harder to tell people that general economic issues, not kidnapping, account for large numbers of girls and women going into prostitution when they'd rather not - just like it accounts for many, many people all over the world staying in employment they can't stand. (via)

Could aspirin be an anti-cancer drug?

Union workers see only part of big hourly markups at Convention Center - and middlemen get 150% more than the workers. The "new economy", generates a special kind of thinking, where being a middleman is worth more than actual work.

Maya Angelou on the Black Side of the Tracks, 1982, with Bill Moyers.

The Worst Waiter in History