That's the way to lose your chains 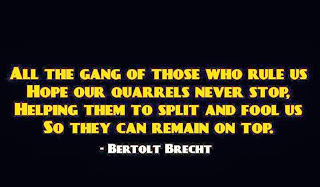 Sorry if you missed me - been preoccupied over the last week. Or distracted. Or something.

This week on Virtually Speaking with Jay Ackroyd, Stuart Zechman joins Jay to discuss the prevailing assumptions about the goals of economic policy and what they are supposed to be for.

Digby and Joan McCarter (McJoan) were this week's panelists on Virtually Speaking Sundays.
Last week on Virtually Speaking with Jay Ackroyd: "Masaccio is the nom de blog for Ed Walker, former Securities Commissioner for the State of Tennessee. He and Jay Ackroyd discuss the nature of markets and their role in a mixed economy. "Market solutions" have become an objective for policy makers, both conservative and centrists, which is entirely wrong. Markets are policy tools, not policy goals.Moreover,there are no "free markets." Markets can only arise within a framework of complex regulation. There is no more regulated marketplace than securities markets." Homework for this episode includes "How High Frequency Trading Works".

On The Majority Report:
Sarah Leonard, about her new article for Al Jazeera, "No sleep till world domination," on how Wall Street and Silicon Valley work cultures support inequality.
Matt Stoller: The Lost History of Free Trade
Mike Konczal: The Voluntarism Fantasy - Because there was never a time when charity and volunteerism solved the problems of the poor.

Obama gave a speech that was, well, incredible. And not in a good way.

This is how a liberal president talks about national security.

Joe Firestone says, "Progressives Need to Up Their Game Against Social Security's Enemies." Which isn't a terribly new thing to say, and we all know there's a reason why members of the Democratic leadership who call themselves "progressive" aren't making the case against Social Security's enemies, but since they're not, everyone else needs to study up on the issue and press the case even harder. (The discussion of taxes is beside the point since when the Democratic leadership talks about raising taxes on the rich, they aren't really talking about doing so in any significant way. Eliminating the cap on Social Security is a good idea, but if we're going to focus on economic inequality, it's going to take massive wealth confiscation at the top to make any real difference. I'm all for a 100% tax on wealth over $100,000,000, but that's not a proposal I've been hearing a lot about.)

Post-racial America - There are still people who think black people get "special treatment". Yeah, it's special, all right.
Robert Reich says if nobody good runs for president, he will.

"Microsoft Looked Through Reporter's Hotmail And MSN Chat Accounts To Identify Windows 8 Leaker: Apparently, Microsoft's desire to track down someone who leaked screenshots of Windows 8 is so strong that it's willing to violate its own privacy guidelines and promises to the public -- even if it means undermining Microsoft's main promotional campaign for email services." Update: But here's The Register's take, which puts a different light on things. And a further update to the story.
"Exile: Sarah Harrison On Paying The Price For Helping Edward Snowden "I cannot return to England, my country, because of my journalistic work with NSA whistleblower Edward Snowden and at WikiLeaks. There are things I feel I cannot even write. For instance, if I were to say that I hoped my work at WikiLeaks would change government behaviour, this journalistic work could be considered a crime under the UK Terrorism Act of 2000."

"Iraq War Vet Whose Skull Was Fractured By Oakland Cops During Occupy Protest Settles For $4.5M"

I have nothing to say about Fred Phelps dying except that it would be nice if his family and flock don't continue his business model. However, Bill Day said this. And Tyler Lopez and Mark Evanier figure we owe Phelps a debt for helping to energize gay rights.

I was looking for an article on the median income for 1914. Apparently, the word "median" just doesn't apply. I found a number of items on the average income for 1914, but they didn't really help. The closest I came was "The Overworked Working Poor of 1914: Women and Children and What They Didn't Get Paid". Which is interesting, I guess, but not what I needed.

A plane got lost. That's about as much as anyone knows, but it dominated the news all week.

I saw this in the sidebar of Making Light, where Teresa had linked it as "At which point, a historian has a horrible realization...."
And from Patrick:
"A Church So Poor It Has to Close Schools, Yet So Rich It Can Build a Palace" Calvin & Muad'Dib
"Capital One says it can show up at cardholders' homes, workplaces" ("Even the Internal Revenue Service cannot visit you at home without an arrest warrant," Rofman observed.)"

Your amazing bus stop - This is brilliant, although no power on earth could get me to buy the product, even if I still drank fizzy soft drinks. I still can't believe people drink diet soda.

Everybody's got a list in their head of things they'll do if they ever somehow end up with too much money. My list is mostly about sharing the wealth and has very few items of personal luxury, but these just went on it.

You just never know where William Shatner will turn up next.

Have some more Animusic: "Resonant Chamber".

Rascals, Live (and not young)