I don't know what it's all about 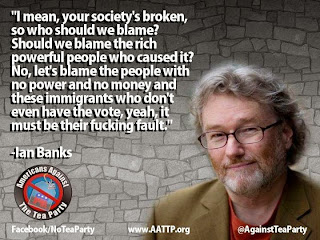 "I've been a loyal American all of my life, long enough to realize what the true American way is. The true American way is a simple function of appetite. When I see something I want, I take it - as much of it as I want. And I don't care a bit if that doesn't leave enough for anyone else." - Lex Luthor

I like the Iain Banks quote in the graphic, but I can't help feeling the same lack of attention that led to the misspelling of his name is responsible for bothering to be against the Tea Party when there are bigger fish to fry. A great deal of money has gone into convincing you - whether you identify as liberal or conservative, Democrat or Republican - to hate the people in the "opposite" tribe, and the Tea Party is a wonderfully misleading alternative to the two major parties/identifiers. You have three "parties", all funded by the same people, led by people who want to dismantle good government and reduce service to the people on behalf of a multinational group of extremely powerful people who think you are just an impediment to them having a good life - and their followers are all people like you who want the government to serve the people and not just corporations and a handful of rich dynasties scattered all over the globe and successfully (so far) managing to suppress the vast majority of ordinary people who have to work to live.

Alternatively, here is Abbie Hoffman's response to Jerry Rubin's emergence as a Yuppie. The context may be lost, but he was right then and he is still right. "The battle is not over."

RIP Tony Benn. I used to spend a lot of time talking to MPs, and only two MPs from the Labour Party were willing to say they opposed censorship. They were Mo Mowlem and Tony Benn. There used to be a joke floating around about how his lengthy name (Anthony Wedgewood Benn, Viscount Stansgate), got smaller and smaller until someday it was expected he would simply be known as "Ton" (pronounced "tone").
10 quotes from Tony Benn. - It's definitely worth listening again to Benn's explanation of the National Health Service - and democracy and choice - from Sicko.
Tony Benn on democracy. "Every generation has to fight the same battles again and again and again."

Do not tell me that the left isn't as good as the right at telling it. We were always better. But we forgot to buy up all the radio and TV stations.

David Dayen and Stuart Zechman were this week's panelists on Virtually Speaking Sundays. They discussed "Dianne Feinstein, the Senate and the CIA: a Constitutional crisis. Then the Progressive Caucus Budget and the politics of income redistribution. Plus political satire from Culture of Truth." Background material/homework for the show includes:
Steve Coll in The New Yorker, "The Senator vs. The C.I.A."
LarryE, "Spying fan Dianne Feinstein objects to being spied on"
"Obama: Taking Sides In CIA-Feinstein Spat ‘Not Something That Is An Appropriate Role For Me' To Wade Into"
Dday: "This Is the Fed's Most Brazen and Least Known Handout to Private Banks"
Dday: "Most despicable bank scam ever? How you may be paying them checking fees for following the law!"
The People's Budget
Progressive Caucus Unveils the Better Off Budget
A little background on Jack Anderson for those too young to remember or too old to still remember.
"NBC News Prez to meet with David Gregory"

Once again, thank the FSM for Crooks and Liars for providing their own videos of material they highlight from Comedy Central, in this case for this very good clip of Jon Stewart taking a GOP mouthpiece to school about food stamps.
Poor people's health care - not the same as everyone else's.

"Household Debt and the Great Depression: In November 1930, before anyone knew how Great the Depression would be, Charles Persons published an article in the Quarterly Journal of Economics called 'Credit Expansion, 1920 to 1929, and Its Lessons.' His thesis was stated forcefully in the first paragraph: 'The thesis of this paper is that the existing depression was due essentially to the great wave of credit expansion in the past decade.'"

Something Krugman says too little about in "That Old-Time Whistle" is that dismantling War on Poverty programs is something that started the minute Lyndon Johnson left the White House and that precious little is left of it. Conservatives hated those programs because they worked. Getting rid of them while continuing to blame them for the devastating effects on our communities of corporate irresponsibility is a great twofer for those folks, just like it was back in the day when they started crippling any program aimed at helping low-income families and then blamed the resulting effects on black culture. Black families didn't suddenly start splintering because they just collectively decided it would be more fun, they did it as a direct response to the fact that welfare rules were changed to make it impossible to get enough money to feed your kids if the father was still in the home - a rule that was "justified" by claims that such homes were somehow not "the truly needy". Once conservatives took over leadership of the Democratic Party, we had Clinton ending "welfare as we know it," thus making it even more difficult for people in the plundered inner cities to get by. This was disguised somewhat by an economy that overheated in the wake of the "technology revolution" of the period, but we all know what's happened since.

Snowden more optimistic than Digby - Or at least, Snowden's lawyer believes Snowden's revelations will spur a reversal of the entrenchment of the Deep State. Digby fears that not enough people care and the Deep State is so entrenched that its hold can't really be reversed.

I remember when I first saw an article in Time promoting the idea that depression was caused by a chemical imbalance (complete with nifty neon-lit pictures of brains) and that a brief infusion of drugs could reset people. There was no evidence for the idea, of course, and if I'd been a bit more cynical at the time I would have realized it was all an unlabelled advertorial for a new line of drugs that shrinks could hand out like candy. But the thing was, even then, you were only supposed to take these drugs for a couple of weeks and then you would be toggled back to normal. Except no one I know who was ever given this treatment was simply taken off the drugs after a couple of weeks and sent on their merry way. In fact, they seemed to get worse, continued on the drugs, lived in terror of not being able to get the drugs, and never recovered from their depressions. And some of these people had situational depressions, they would surely have recovered with no treatment at all. But they didn't, and instead they are spending a pile of money on dope all the time...
Why is a widely-used drug to treat pneumonia that used to cost $4.00 now costing $50.00?

Jeralyn Merrit tells me that Comcast has been airing a medical marijuana ad. That's new, I can't imagine that happening ten years ago.
Jeralyn also has a brief post on the failure of the nomination of Debo Adegbile to head the Civil Rights Division on the grounds that he defended some civil rights. Or at least he was part of the division of his organization that did. But it was Mumia Abu-Jamal. Anyone who is familiar with the details of that case knows it never passed the smell test, and the fact that his death sentence - not his conviction - was overturned has had the law-enforcement lobby in a tizzy for some time.

"Tomgram: David Bromwich, The Leader Obama Wanted to Become and What Became of Him: "Doesn't this just say it all? After Majority Leader Harry Reid went the ultimate mile for the president, loosing the 'nuclear option' on the Senate to wipe out Republican filibusters of a bevy of log-jammed presidential nominations, and after the Republicans -- the president's proudly disloyal opposition -- had fumed to their hearts' content, Obama still couldn't get his nominee to head the Justice Department's Civil Rights Division confirmed. The culprits in a Congress where, from the White House point of view, evil has been every shade of Republican turned out to be seven disloyal Democrats. Despite a "sustained closed-door effort" by Obama and his aides, they voted the nominee down. Think of it as a little parable for the Obama presidency."

Will Bernie Sanders run for president? He says he'd make a better president than Hillary Clinton, and he's right about that. He'll have to register as a Democrat, though.

Tom Tomorrow on what the Sunday talk shows said about Ukraine.

Life in Pottersville continues to bite - help if you can.

How many women can you find in this photo?

An Entire Day of All of Europe's Air Travel, Visualized

Not sure what it is about this picture, but I just can not stop laughing.