No tears, no fears, no ruined years, no clocks 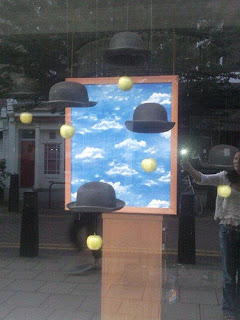 I'm not posting any new news I see posted today until I've seen all the discussions of whether or not it was an April Fool's joke. All of the following is old news:

Panelists this week on Virtually Speaking Sundays: Digby and Stuart Zechman. I live for moments like this. Go listen.

Free Trade and Unrestricted Capital Flow: How Billionaires Get Rich and Destroy the Rest of Us

"So DO Tax Cuts Create Jobs?" Well, of course not. Taxing money that isn't being used to create jobs can't stop jobs from being created.

David Dayen: "Can the Supreme Court hike drug prices? How the industry uses the high court to allow bribery, evade the FDA, and boost medicine prices 5 times their cost"

Glenn Greenwald: The message is that the US is viewed as the greatest threat and that it is US aggression and violence far more than any other cause that motivates support for al-Qaida and anti-American sentiment. The son of the slain Afghan police commander and his pregnant relatives says that villagers refer to US Special Forces as the "American Taliban" and that he refrained from putting on a suicide belt and attacks US soldiers with it only because of the pleas of his grieving siblings. An influential Southern Yemeni cleric explains that he never heard of al-Qaida sympathizers in his country until that 2009 cruise missile attack and subsequent drone killings, including the one that ended the life of Abdulrahman (a claim supported by all sorts of data). The brutal Somali warlord explains that the Americans are the "masters of war" who taught him everything he knows and who fuel ongoing conflict. Anwar Awlaki's transformation from moderate and peace-preaching American cleric to angry critic of the US is shown to have begun with the US attack on Iraq and then rapidly intensifying with Obama's drone attacks and kill lists. Meanwhile, US military officials and officers interviewed by Scahill exhibit a sociopathic indifference to their victims, while Awlaki's increasingly angry sermons in defense of jihad are juxtaposed with the very similar-sounding justifications of endless war from Obama."

A really fine example of corruption: "Lanny Breuer Cashes in After Not Prosecuting Wall Street Execs, Will Receive Approximate Salary of 4 Million Dollars."
"Lanny Breuer and the Immorality of Our Morality"

Jonathan Turley, "Too Big To Jail? Obama Administration Agrees To Large Penalty In Exchange For Letting Billionaire Escape Insider Training Charge While His Subordinates Plead Guilty: John Cassidy has a remarkable story out in the New Yorker this week about a sweetheart deal cut by the Justice Department with one of the wealthiest men in the world, Steven A. Cohen (who may be pictured here at a standard picnic, or not). Cohen's company would pay $626 million but not have to admit any wrongdoing and Cohen would face no personal sanction. The billionaire appears to be celebrating this month with a buying spree with a Picasso painting and a huge new mansion. What is amazing is that various Cohen subordinates have pleaded guilty and Cohen has been tied directly to an insider trading allegation. Yet, he appears to 'too big to jail' as a continuation of the Obama Administration's bifurcated legal system for the super rich and the rest of us." (Thanks to commenter Romberry for the link.)

Dave Johnson, "Did The Rich Cause The Deficit?"

Who wanted the gay marriage case? "As it turns out, it would seem that the conservative members of the court, making a calculation that their chances of winning would not improve with time, were behind the decision to take up the volatile subject."

The Golden Girls on gay marriage

The bridge to the 21st century takes you from the middle class to homelessness.

Still crazy after all these years: David Stockman, who apparently thinks continual recessions and crises and depressions are better than the economic stability and progress that mean old FDR and all his spending and regulations brought us. (Via Krugman and more Krugman.) Trouble is, if Stockman wasn't distracted by debt mania, he might have written a more intelligent piece, and almost did - about crony capitalism and bank bailouts. And he might have noticed that the crisis we have today is a direct result of undoing all those SEC regulations (and neutralizing the regulators) that FDR put in place. And if Krugman weren't distracted by his own brand of fear, he might have had a better insight into where Stockman went wrong.

Formerly Who is IOZ? muses.

Paul Williams, Crawdaddy Founder, 'Godfather of Rock Criticism' Dead at 64
Celebrating Paul's work
And, of course, from Rolling Stone.
I have several memories of Paul I won't bother to recount (except that the sharpest was the time we argued about Heinlein over dinner). I will say that I had a moment of reverence when Ted White told me, as he was running an issue of my fanzine off on his Gestetner, that he had also run issues of Crawdaddy! off on that very same machine. He wouldn't let me crank it, but he did let me touch it.)

Google celebrated Cesar Chavez's birthday, and the wingers went nuts because they thought it was Hugo.