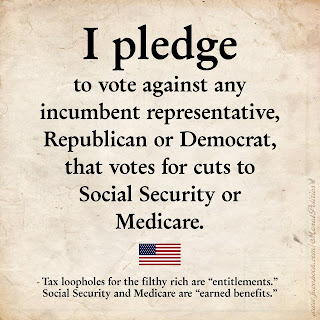 This week on Virtually Speaking Sundays, Digby and Gaius Publius review an exciting week of Obama's transformational presidency.
Every episode of Culture of Truth's most ridiculous thing from the Sunday talk shows manages to infuriate me, but they've been particularly steam-inducing lately. I'm so glad CoT watches these things so I don't have to. Last week's, on What the Base Wants, really made me want to punch out some pundits (and the Dem operatives who give them their talking points).
Maira Sutton of EFF and Sierra Club Trade Representative Ilana Solomon talked about trade and globalization on Virtually Speaking with Jay Ackroyd.

On The Majority Report, Matt and Michael sat in for an ailing Sam Seder and did a great interview with Feministing Executive Editor and Fast Food Forward organizer, Samhita Mukhopadhyay, who "explained the importance of the living wage movement spearheaded by fast food workers in New York City, the danger of how we frame poverty in America, Michelle Obama's powerful recent speech on guns violence and opportunity and how Anonymous is helping expose rape culture."
Previously, Sam interviewed Mark Blyth about Austerity: The History of a Dangerous Idea, and "the three big reasons austerity is a problem, the impact of global trade on austerity policies, the history of the idea of austerity, why the United States is in a stuttering recovery and the Europeans have created self created depression by practicing austerity, why growth is the answer to debt and why austerity is such a dangerous and resilient idea."

Waste in government: "Iraq War Could Have Paid For 100% Renewable Power Grid."

"Just comprehend the magnitude of what is being said here. Obama misleads on targeted assassinations. Or "lies", as we say in English.
Lambert thinks this decision is a failure, but I don't think so. More and more policy decisions these days seem to be based on the idea of "saving money" by making it as difficult as possible for people to determine whether they qualify for programs, and how to get into them.

"'The revolution starts in the ATOS smoking area' - on welfare, addiction, and dependency"

No one could have predicted that we might lose our moral authority by becoming torturers.

Mitch McConnel's got a habit of having "revelations" that people have eavesdropped on him suddenly crop up just in time to deflect some attention from his other nefarious activities. This isn't the first time it's happened and it's hard to believe that the group that keeps doing it isn't being paid somewhere up the line by McConnel himself.

Russell Brand as one of Thatcher's children: "Perhaps, though, Thatcher "the monster" didn't die yesterday from a stroke, perhaps that Thatcher died as she sobbed self-pitying tears as she was driven, defeated, from Downing Street, ousted by her own party. By then, 1990, I was 15, adolescent and instinctively anti-establishment enough to regard her disdainfully. I'd unthinkingly imbibed enough doctrine to know that, troubled as I was, there was little point looking elsewhere for support. I was on my own. We are all on our own. Norman Tebbit, one of Thatcher's acolytes and fellow "Munsters evacuee", said when the National Union of Mineworkers eventually succumbed to the military onslaught and starvation over which she presided: "We didn't just break the strike, we broke the spell." The spell he was referring to is the unseen bond that connects us all and prevents us from being subjugated by tyranny. The spell of community." I know people who just see him on Ross' show won't believe me, but Brand is smart, insightful, and as this piece shows, a thoughtful and very fine writer. His facility for unpacking and re-purposing metaphor is downright impressive. "It always struck me as peculiar, too, when the Spice Girls briefly championed Thatcher as an early example of girl power. I don't see that. She is an anomaly; a product of the freak-onomy of her time. Barack Obama, interestingly, said in his statement that she had "broken the glass ceiling for other women". Only in the sense that all the women beneath her were blinded by falling shards. She is an icon of individualism, not of feminism." Thatcher was indeed a queen bee - nothing new about that.

Jay Ackroyd linked this wonderful piece that starts off with a stray kitten and takes us through the meaning of FDR's warning about fear itself and the people who have been hiding under the porch terrified of everything ever since.

It's amazing what you can buy on the internet. And I'm sure that's a much lower price than it usually costs to buy them!