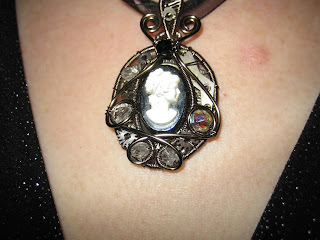 Marcy Wheeler (emptywheel) and Dave Johnson of Seeing the Forest talked about how the Boston bomber is being treated (and how people are surprised by how the rights of American citizens are being abrogated), and about how things that would be considered acts of terrorism (or acts of war!) are treated as okay if they are just done to make a profit, and a lot of other things, on Virtually Speaking Sundays. (This was before the accused was finally Mirandized.)

This breathless NPR piece called "How Much Should We Trust Economics?" is okay as far as it goes, but I'm frankly amazed at the number of commentators who gave prominence to how Carmen Reinhart and Ken Rogoff made an error on their Excel spreadsheet. Yes, of course, there are mathematical errors in studies all the time - errors made in good faith. (But it's amazing how often the errors work in the direction of the political biases of the funders of the research.) Okay, the math was bad - and it was looking at the spreadsheet that first alerted Thomas Herndon to problems with the numbers, but on further inspection it also turned out that R&R had cherry-picked their data, and that's not just a matter of numbers. Got a significant nation where debt was above 90% but there was reasonable growth? Oops, that doesn't fit, let's just lower the weight of that country and put greater weight on some other country that did have a big drop-off in growth. To leave that cherry-picking out of the analysis is to whitewash the more egregious errors in the study. But I also get a sense of unreality at listening to the way people make it sound like the Reinhart-Rogoff study was such a big deal in the first place, because it was only released three years ago, well after the austerity policies had been in place and actively promoted. Truthfully, it's been going on for more than 30 years, and certainly Obama was pushing it when he got to Washington - he didn't suddenly start doing it three years ago. The fact is that this study existed to rationalize policies that had been in place for some time, after the fact. It was just like all the other arguments and "facts" that are used to justify policies that demonstrably, empirically, do not work. Unless, that is, your goal is to eliminate democracy and economic stability (economic freedom) for the majority.

Pierce: "It really is remarkable at this point how completely tattered the case for building the pipeline actually is. The jobs claims have been debunked time and again as inflated. The public-safety promises from TransCanada, the corporation seeking to completely the pipeline, have collapsed as badly as that pipeline in Arkansas did. And, in a country that prizes bipartisanship as much as this one allegedly does, the coalition against the pipeline is as diverse as could ever be expected - ranchers and tree-huggers, scientists and Native American activists. On the other side is money and power, and a simple brute desire not to be frustrated by the lines of ranchers, tree-huggers, scientists, and Native American activists. That's the whole fight now. One side wants what it wants because it wants it. Period. The president has to decide where he's lining up."
In all likelihood, Baucus is quitting because he's got better chances with juicy corporate "jobs" than with the electorate after that piece about him in the NYT. Which tells you what you really need to know about why Congress behaves the way it does - it's not the campaign costs, it's the retirement plan.

For certain types of terrorists, terrorism pays off - when it's terrorism against reproductive freedom.

This is heart-breaking - Denmark's economy has been doing better than most because they hadn't caught austerity fever - until now.

"Seven dead, sixty one injured in opposition attacks in Venezuela."

Decent piece by Froomkin, "New Torture Reports Blames Obama and the Media for Not Confronting the Truth."

Robert Johnson on the Oligarchs: "They're All Standing on the Deck of the Titanic Looking in Each Other's Eyes."

"John Prescott: Margaret Thatcher closed the mines out of sheer political spite: The ex-Tory Prime Ministyer buried an industry that was still fit for purpose." The article is pretty straightforward, but copy-editing seems to be a dead art.

Alan Grayson did a Reddit Ask Me Anything. Scandalously, he refused a request to provide a picture of himself with a cat. My kinda guy!

Odd. "Bill for compulsory science fiction in West Virginia schools: "Republican state delegate Ray Canterbury says move would inspire pupils to use practical knowledge and imagination in the real world." I thought Republicans were against that.

I think in the back of my mind I've always believed that this should exist everywhere. (via)

"I wear the chained CPI I forged in life," replied the Ghost.

"Man sent to jail for watching 'pixie sex': A man has been jailed for watching cartoon videos of elves, pixies and other fantasy creatures having sex. Ronald Clark downloaded the Japanese anime cartoons three years ago, setting in train events that would see him in court in Auckland and jailed for three months for possessing objectionable material, and sparking debate as to what harm is caused by digitally created pornography." (Thanks to Gary Farber for the tip.)

I've just learned that, though the others were just Christopher Robin's stuffed toys, the real Eeyore was actually a live donkey. Fancy that. I wish I could link you to the long and fascinating interview with John Pertwee (who did a lot of things besides being an actor - including riding Eeyore) that this fact came from, but you'd need to get your hands on issues #457 and #458 of Doctor Who Magazine.

This ad gave me a sense of the surreal.