Roll on thunder, shine on lightning 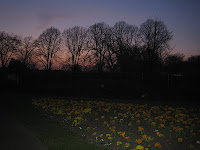 Cliff Schecter handicapped the election on Virtually Speaking with Jay Ackroyd, and he thinks there are reasons to be hopeful at the prospect of two of the worst Senators in the Democratic caucus being replace with two progressives. Cliff says parties have been changed from within and we can do it again. Let's hope he's right. (Also, did you know Al Franken could draw the US map from memory?)

Here's Matt Stoller's "The progressive case against Obama," and here's Matt debating Sam Seder on the subject on The Majority Report. (And I was stunned to learn that Matt Stoller is a regular feature of Russell Brand's show. Crikey!)

Dean Baker, "Get ready for the phony debt fight: Both candidates agree: The national debt is the most urgent challenge facing the nation. But it's not -- at all."

Digby asks, "Will common sense prevail over the phony deficit crusade?" I think we all know the answer to that: "Sadly, budget realities have very little to do with the jihad against Social Security and medicare. It's not about the budget or the debt. It's about fixing the national 'character.' Just ask Paul Ryan. He thinks these programs are 'a hammock that lulls able bodied people into lives of complacency and dependency, and have that dependency culture.'" And Barack Obama thinks they interfere with our ability to "compete" with China in the race to the bottom.

"Silences Louder Than Their Words: Effective Economic Policies Neither Candidate Advocates" - I have an even longer list, but the fact is that Obama and Romney both avoid mentioning any policies that could genuinely be expected to have a positive impact on the American economy.

"Political Polling Is No Longer Meaningful: When you receive an unexpected call from a private number or 1-800 number, do you answer the phone? Most people don't, and those who do are hardly a representative sample of the American population. Yet the results of all major political polls are based on the assumption that the 9 percent of us who answer the phone are perfectly representative of the 91 percent who don't." And that means we need good exit polls more than ever. Oh. "The Washington Post has reported that the major news networks plan to cut back dramatically on exit polling in 2012. This is a problem because with many states moving to paper-free electronic voting, exit polls are the only way to detect errors and fraud. Without a paper trail and with no solid polling, there will be no way to know that the results reported by private voting machine operators are in fact correct." (Not helped by the fact that we have the world's stupidest political press.)

Tell me honestly, if you interviewed a bunch of Obama supporters, wouldn't a lot of them sound just as wrong as these Romney supporters? (Really disappointed in Meatloaf, though.) (Meanwhile... Is Chris Rock being more ironic than he knows?)

Greg Palast offers a free download of his book, Billionaires & Ballot Bandits. (But donations are welcome, of course.)

And now, a political message from Joss Whedon.

This is a story I completely missed last month that highlights an argument I've engaged before about the idea that a right - in this case free speech - is protected as long as the government isn't the entity that punishes you for exercising it. But the fact of the matter is that if private entities are acting in a way that prevents you from being able to speak freely and survive, you don't have free speech.

If you can, listen to Lou Reed's New York Shuffle.

I really enjoyed the Halloween Google Doodle, and it's nice to know there's a page to go to where you can find them all when you miss them or want to see what the other countries are seeing, right here. (I think they should have put this one up outside of Mexico, too.) And since I missed the Star Trek doodle, it's very handy. And I couldn't get the Little Nemo doodle to play properly before, but now that my Internet Access Provider has finally taken my complaint seriously, I can see it all.

I don't want to talk about the storm (or its potential impact on voting in neighborhoods where the polling places have been wrecked by it), but please comment below and let me know that you're okay.