Fever all through the night 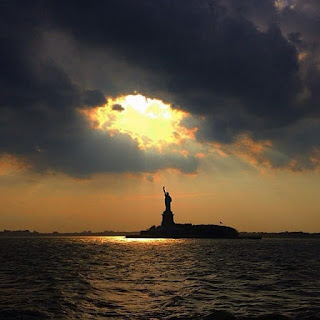 I'll start with the latest headline, which made me happy: "New poll shows Sanders ahead of Clinton in New Hampshire: Sanders seen at 44 percent, Clinton with 39 percent of likely New Hampshire primary voters" - Sure, it's just one poll and it's just New Hampshire and we're more than a year out, but hey, who says he can't win?

In between sleep, I keep waking up and seeing more and more about Black Lives Matter versus Bernie. Possibly the best piece I've seen on the issue is from Doug at The South Lawn, who expresses doubt about both the efficacy of the tactics of the people who are going after Bernie and the analysis that underpins their actions, in "Black Lives Matter and The Failure to Build a Movement," where he notes that they refer to Bernie's position as "weirdo populist economic determinism" and seem to deny that these economic issues are of interest to black Americans (including the 90% of black people who say they are very much concerned about these issues). There are many articles on the web questioning the bona fides of the two women who prevented Bernie from speaking, but what bothers me is that they've said themselves that was precisely their intention. What they did not do is expand or add to the (already-existing) discussion of police violence. The media misreports that Bernie has added the issue to his speeches in response to BLM, but the fact is, Bernie isn't saying anything he wasn't saying weeks and months and years ago, it's just that the press is noticing it now (and BLM and their defenders are taking credit for it). In any case, you can watch video of Bernie's Portland rally here and judge for yourself. Meanwhile, there is no shortage of links to articles about the disruption in Seattle.
* Oliver Willis: "Right Now #BlackLivesMatter Is Wasting Everybody's Time: Representatives of the Black Lives Matters movement met with Hillary Clinton, and if you actually thought this movement was about stopping black people from being killed and reforming criminal justice issues with minorities, you should not only be disappointed but disgusted."
* Pierce at Esquire: "Bernie Sanders and Ferguson Gunfire: When Protest Loses Its Purpose"
* Seattle Times: "Black Lives Matter protesters shut down Bernie Sanders; later rally draws 15,000"
* Washington Post: "Protesters drove Bernie Sanders from one Seattle stage. At his next stop, 15,000 people showed."
* David Atkins at Washington Monthly: "BlackLivesMatter Protesters Err in Attacking Those Who Give Them the Microphone"
* "Black Lives Matter Movement Gives Bernie Sanders' Racial Justice Agenda the Push It Needs"
* Pramila Jayapal at The Stranger: "Guest Editorial: Why Saturday's Bernie Sanders Rally Left Me Feeling Heartbroken"

Somewhere along the line, I was reminded of Bill Moyers' interview with Adolph Reed last year about the demise of the American left, which seemed to me to have some salience. And here's an article by Reed from 2009, "The limits of anti-racism".

Maybe Rev. Barber's Forward Together has that "All power to all the people" feel I can get behind. Here's Nicole Sanders' interview with him just after Netroots Nation, and here he is on video, delivering.

"Ferguson is our "libertarian moment," but not in the way some libertarians want you to believe"

Charlie Pierce says, "The Keystone XL Pipeline Hits a Snag: Following hearings in South Dakota to determine whether to recertify TransCanada's expired permits for the pipeline, the project must now deal with a concern for safety issue. Up in the newly formed petro-state of South Dakota, the people wishing to build our old friend, the Keystone XL pipeline, the continent-spanning death funnel, have run into a snag, having discovered that all politics is local...and unusually pissed."

MoveOn announces donor strike in response to Schumer's Iran position - Schumer is angling to replace Harry Reid as Senate leader, he needs to be stopped.

"NYPD union introduces vagrant-shaming photos to address quality-of-life issues." Hm, in the richest country in the world, who should be ashamed of people having to literally live on the streets? Time for Ezekiel 16:49, again.

Jeremy Corbyn's try for the Labour leadership seems a lot like Bernie's run, complete with "serious" people saying it's a loony idea. I always did like Corbyn, but of course, the New Labour types don't. Brian Eno likes him, too.

Meanwhile, if you're in Canada, you can geek out on this election choice.

Another High-Profile Sex Trafficking Tale May Be Falling Apart [...] It's a pretty good summary of the standard narrative on sex-trafficking these days: it's everywhere, all the time, and we don't even know it; the only way to combat it is to keep throwing cops and money and laws at it; and anyone who questions any of this is only aiding the evildoers. It's almost impossible to argue with people who buy this narrative, because the more evidence you present challenging sex trafficking's pervasiveness, the more they see proof that sex trafficking is so under the radar we need to throw more cops and money and laws at it. As we've seen time and again, however, these tactics tend to under-produce on the stopping sex trafficking front and overcompensate by targeting consenting adult sex workers - either by arresting them or labeling them victims and sending them to things like "prostitution diversion therapy" - and their clients. "

John Oliver on Sex Education, and a strangely slow Part 2. - or you can just watch the sex ed video itself at normal speed.

RIP: Frances Oldham Kelsey, FDA scientist who kept thalidomide off U.S. market, dies at 101
* George Cole, actor who played Arthur Daley, dies aged 90. The world is your lobster, and it's time again for this song.
* Wrestling legend Rowdy Roddy Piper dies aged 61. But his real name-check, of course, is for his role as Nada in John Carpenter's movie about living in a neoliberal nightmare, They Live, in which he was out of bubblegum but he kicked ass.

Strangely, they let me see the last of Jon Stewart.

A Personal Take on Go Set a Watchman from Ursula Le Guin.

"Obesity 'can cause sanctimonious, idiotic advice'."

Carol Kaye - you may not know her name, but you know her bass lines.

Bette Middler, "Fat As I Am"