She never got there, they say 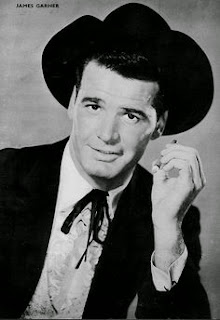 RIP James Garner: "Through many films and two influential television series, Maverick and The Rockford Files, James Garner, who has died aged 86, developed a persona with a subtly different appeal. It began as original and accrued familiarity over the course of four decades: a coward who was the soul of honour, a hero likely to ride away, stick his finger up the barrel of his opponent's gun or get winded in a fight and complain of damage to his dentistry." It's got to be a national day of mourning for at least my whole generation. And the one compensation I ever get from these things is some great story from Mark Evanier about all the great stuff the guy did and when he met him and - but we don't get that this time. Lots of people saying good-bye, of course, he meant so very much. (BBC obit)
Watch Maverick, "Stage West"
The Rockford Files, "The Deep Blue Sleep"
And, of course, there is when Charlie meets Mrs, Barham and what he said to her. (And I know there is a clip of the whole scene in one clip somewhere because I've posted it before, but I just can't seem to find it now.)

Wired: "A California student got a visit from the FBI this week after he found a secret GPS tracking device on his car, and a friend posted photos of it online. The post prompted wide speculation about whether the device was real, whether the young Arab-American was being targeted in a terrorism investigation and what the authorities would do. It took just 48 hours to find out: The device was real, the student was being secretly tracked and the FBI wanted its expensive device back, the student told Wired.com in an interview Wednesday."

David Dayen says, "The Costs of Obama's Housing Mistakes Keep Piling Up [...] When homeowners hear from a government looking to help them, and previous efforts along similar lines led to broken promises and foreclosure nightmares, you can't blame them for saying no. This is why, if you believe in an activist government that can help solve problems, failures of this sort become so debilitating. The housing policy disappointments reinforced the old Ronald Reagan dictum that the most dangerous words in the English language are 'I'm from the government and I'm here to help.'"

"I was poor, but a GOP die-hard: How I finally left the politics of shame [...] To make up for my own failures, I voted to give rich people tax cuts, because somewhere deep inside, I knew they were better than me. They earned it. My support for conservative politics was atonement for the original sin of being white trash."

ADVICE TO CONSERVATIVES (OFFERED NOT IN KINDNESS, BUT BECAUSE THEY'RE TOO STUPID TO TAKE IT).

Check to see if your website is being blocked in the UK.

It's amusing to see some of our friends in pictures on the Forbes site.

In Memoriam: "The KKK Took My Baby Away"