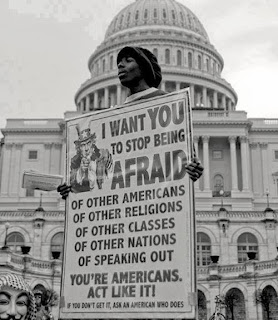 RJ Eskow and Gaius Publius are scheduled to be tonight's panelists on Virtually Speaking Sundays. They apparently plan to talk about " the mentality of plutocrats and climate.." With Culture of Truth's usual contribution.

Sam Seder's guest the other day on The Majority Report was Melissa Gira Grant, author of Playing The Whore: The Work of Sex Work, and it was a pleasure to hear her saying things I've been saying for years. Most of the criticisms you hear about sex work apply to plenty of other jobs that we don't talk about the same way. Is it a job you take only because you need the money? You mean, as opposed to working in a factory, or for a horrible boss, or as a cleaner? Do miners go down the mines for the view, or for their health?
And here's what might be seen as a companion piece at the Guardian, "Strippers are not the problem - they're just doing a job."

Taibbi, "The Vampire Squid Strikes Again: The Mega Banks' Most Devious Scam Yet [...] All of this was big enough news in itself. But it would take half a generation - till now, basically - to understand the most explosive part of the bill, which additionally legalized new forms of monopoly, allowing banks to merge with heavy industry. A tiny provision in the bill also permitted commercial banks to delve into any activity that is 'complementary to a financial activity and does not pose a substantial risk to the safety or soundness of depository institutions or the financial system generally.' 'From the perspective of the banks,' says Saule Omarova, a law professor at the University of North Carolina, 'pretty much everything is considered complementary to a financial activity.'"

I really wish I could get across to certain of my liberal friends that both sides are funded by the Koch Brothers. You don't get something like the DLC out of nowhere, and when the people who support it are so few and so fringy, there has to be a lot of money behind it to give it the profile - and the success - it's had. "His book's acknowledgments list only sixteen politicians but identify twenty people 'whose support and generosity...made the DLC story possible.' Among them are Jon Corzine, the disgraced financier and former New Jersey governor; Michael Steinhardt, a hedge fund manager, major Republican donor and founder of the defunct neoconservative New York Sun newspaper; and Rich Richman, who recently gave $10 million to Columbia University for a research center directed by R. Glenn Hubbard, former chair of George W. Bush's Council of Economic Advisors. (A Newsweek investigation in 2000 turned up some DLC underwriters that From doesn't mention: Du Pont, Philip Morris, Merck and the Koch brothers.)" That'd be DLC power-boy Al From.

Alex Pareene, "Is one of 'the crazy ones' behind a threatening email sent to House Republicans? [...] Yes, Republicans also think of certain other Republicans as 'the crazy ones.' No, those Republicans do not generally have policy beliefs that differ significantly from those of the crazy ones. One issue that does divide them, though, is the debt ceiling. 'Sane' Republicans exploit the regular mandatory debt ceiling vote by falsely claiming that raising it incurs additional debt, while understanding that raising the limit is necessary. 'The crazy ones,' though, genuinely believe that not raising the debt limit wouldn't end up causing an economic catastrophe, or that somehow causing that catastrophe is necessary in order to finally shrink our bloated federal government. What makes 'the crazy ones' crazy, in fact, is that they genuinely believe the cynical lies - about government debt, global warming, taxes, healthcare, immigration, Democratic Party fiscal policies and so on - that the non-crazy ones have been feeding the rubes for years." Via Atrios.

Jay Ackroyd notes that "Glenzilla's new home has quite the masthead." It sure does. And here's Dan Froomkin on The Terrible Toll of Secrecy.

"You Know Who Else Collected Metadata? The Stasi. The East German secret police, known as the Stasi, were an infamously intrusive secret police force. They amassed dossiers on about one quarter of the population of the country during the Communist regime."

Call for the UN to stop giving anti-drug aid to Vietnam: "The United Nations should immediately freeze anti-drug assistance to Vietnam after the communist country sentenced 30 people to die for drug-related offenses, three human rights groups working to get countries to abolish the death penalty said Wednesday. The call from Harm Reduction International, Reprieve and the World Coalition Against the Death Penalty cites the United Nations Office on Drugs and Crime's internal human rights guidance requiring the organization to stop funding for a country if it's feared that such support may lead to people being executed."

The Odd Man Out and Swamp Rabbit discuss Media Monopoly and the latest (illegal!) assault by Comcast, who bought out Time Warner Cable without, apparently, any concerns by the FCC or Justice.

The History of English in Ten Minutes (Thanks, Moshe!)

This one is about me, I just know it.

I can hear politics in all sorts of things, even this really fine cover of an old Martha & the Vandellas song by Bonnie Raitt.