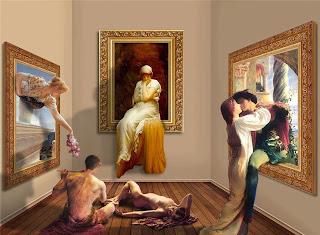 Stuart Zechman explained the problems with the Patient Protection and Affordable Care Act (PPACA) and how to fix them on Virtually Speaking with Jay Ackroyd. Here's Stuart's text outline of those issues. Homework includes a piece from last year in the WaPo, "A Limit on Consumer Costs Is Delayed in Health Care Law."
Joan McCarter and Jay Ackroyd discussed "the politics of the Employment Non-Discrimination Act; Harry Reid's filibuster reform talk; expanding social security; and the results of the 2013 elections and the attendant exit polls" on Virtually Speaking Sundays.

"The rich: 'A class of people for whom humans are disposable commodities'" - Gaius Publius recommends pieces by Chris Hedges and Digby on the pathology of the Cloud People.*

More like this, please: Keith Ellison and Tom Guild in Oklahoma. Talk like the people matter and even the reddest states might just come out on the right side.

Noam Scheiber in The New Republic, "Hillary's Nightmare? A Democratic Party That Realizes Its Soul Lies With Elizabeth Warren"

Key Obama priority: "Getting the Republican Party back in a functioning state"

David Dayen in The New Republic, "Congress Is Starving the Agency That's Supposed to Prevent Another Meltdown"

Matt Taibbi, "Chase Isn't the Only Bank in Trouble"

If your business model requires you to break the law and continuously go to court and pay fines as a matter of course, you'd better make sure you have sufficient reserves of funds for the legal process.

WaPo: "The Great Recession may have crushed America's economic potential [...] The paper offers a depressing portrait of where the economy stands nearly six years after the onset of recession, and amounts to a damning indictment of U.S. policymakers. Their upshot: The United States's long-term economic potential has been diminished by the fact that policymakers have not done more to put people back to work quickly. Our national economic potential is now a whopping 7 percent below where it was heading at the pre-2007 trajectory, the authors find."
Paul Krugman on "The Mutilated Economy". The administration and Congress have conspired in their attack on the nation's economy at the behest of their corporate masters, but there's no reason we shouldn't call it what it is: a national security crisis.

Another surprise from the Pope.
"This might be the worse thing you read today: This story from New Mexico is just insane, and show just how out of control the 'War on Drugs' has gotten."
Election highlights: There's bad news, of course, but a surprising amount of good news.
Well, it would have been nice if they hadn't kept saying "trans fats" and just said margarine is bad for you. Doesn't anyone listen to Julia Child? Jeez.
Not everything is lost, in the world we all want to live in.

"Australian David Hicks: Survivor of Gitmo's Sadistic Abuse: Richard Phillips in 'David Hicks seeks to overturn Guantánamo "terrorism" conviction' reveals that former Guantanamo Bay prisoner Australian citizen David Hicks has lodged an appeal with the US Court of Military Commission Review to overturn his 2007 conviction of 'providing support for terrorism.' It is expected that the commission will NOT quash Hicks' conviction. His American lawyer from the Center for Constitutional Rights will then appeal the case to the US federal district court. "

Digby on the culture of unaccountability and prosecutorial misconduct that puts innocent people in prison - on purpose.

The Rorschach test controversy on Wikipedia. Oh, my!

Cartoon: The high cost of incarceration

"Why Scandinavian women make the rest of the world jealous"

Every now and then I think of these bitter things, and try not to break things.

You can now look at the original Mary Shelly drafts for Frankenstein online.

H.P. Lovecraft's "The Haunter Of The Dark", animated.

Masha and the Bear - a cute little children's show from Russia.

"41 Camping Hacks that are borderline genius" - I don't do much camping, but a few of these are things you can use at home or in the wilds of, say, Central London.

The Essex, because it's the moment to just do it.