I'll never get over losing you 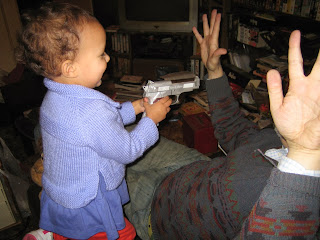 Sam Seder interviewed Diane Ravitch about Reign of Error: The Hoax of the Privatization Movement and the Danger to America's Public Schools about the myth of the education crisis and where the real problem is for our schools, on The Majority Report.

"Huge Change in Senate But Most People Don't Care" - Not sure how huge a change it is, since Democrats never bothered to filibuster anything much in the first place. They appear to have saved it for Supreme Court appointments, as if it's a special case, but with far-right crackpot radicals like Alito, Scalia, and Roberts on the court, it's hard to argue that eliminating the filibuster means extremists will somehow start sneaking onto the court, as if they hadn't already been walking right in and doing the crazy. And, you know, it's not as if we have any proof that Republicans won't change the rule back once they take over the Senate - which could easily happen unless Democrats start behaving as if they believe in democracy in the first place.
Jay Ackroyd got Joan McCarter and KagroX together to discuss what happened with the filibuster and what its impact is likely to be. This isn't a regular episode of Virtually Speaking, but it may clear things up for people to give it a listen.

Obamacare: Experimenting on people when you already know the outcome. This is when you really want to slap someone. And like Lambert, the first thing I thought of when I read that quote from an Obamacare defender was the Tuskegee Experiment. We already know what the outcomes are, we don't have to experiment at the cost of people's lives. And the whole "consumer shopping" approach to health care makes so little sense that it's amazing a person could reach adulthood and argue for it with a straight face. "Oh, yes, I'm in agonizing pain and may have only minutes to get into surgery to save life or limb, but this is a great time to sit down and comparison shop for the best surgeons and figure out which hospital is willing to take me and...."
Found a nice quote from Bob Perillo on FB: "I regularly get called things like "a friend of Ted Cruz" for opposing the ACA from the left -- which is kind of funny, since it was invented by Republicans in the first place. But of course I've just failed to appreciate liberal alchemy: policies made of lead become golden by the mere fact that they have been adopted by Democrats."

This is an interesting take on the guy who is funding Glenn Greenwald's new venture: "The Extraordinary Pierre Omidyar [...] Since its founding in 2004, Omidyar Network has committed nearly $300 million to a range of nonprofit and for-profit "charity" outfits. An examination of the ideas behind the Omidyar Network and of the investments it has made suggests that its founder is anything but a "different" sort of billionaire. Instead, what emerges is almost a caricature of neoliberal ideology, complete with the trail of destruction that ensues when that ideology is put into practice. The generous support of the Omidyar Network goes toward "fighting poverty" through micro-lending, reducing third-world illiteracy rates by privatizing education and protecting human rights by expanding property titles ("private property rights") into slums and villages across the developing world. In short, Omidyar Network's philanthropy reveals Omidyar as a free-market zealot with an almost mystical faith in the power of "markets" to transform the world, end poverty, and improve lives - one micro-individual at a time. [...] So brace yourself, you're about to get something you've never seen before: billionaire-backed journalism taking on the power of the state. How radical is that? In other words: look out Government, you're about to be pummeled by a crusading, righteous billionaire! And corporate America? Ah, don't worry. Your dirty secrets - freshly transferred from the nasty non-profit hands of the Guardian to the aggressively for-profit hands of Pierre Omidyar - are safe with us." There is a distinction between fighting state power and fighting the power. Will Omidyar be happy if his new news project goes after all of it?

Spooky Business: Corporate Espionage Against Nonprofit Organizations: This report is an effort to document something we know little about: corporate espionage against nonprofit organizations. The entire subject is veiled in secrecy. In recent years, there have been few serious journalistic efforts and no serious government efforts to come to terms with the reality of corporate spying against nonprofits. Much of what we do know about this subject has been uncovered by accident. So the picture we have is fragmentary at best: just a few snapshots, taken mostly at random, arising from brilliant strokes of luck, giving a mere inkling of the full range of espionage activity against nonprofits. There are, however, a few things we can say for certain." (.pdf)

"Workplace Climate of Retaliation at Hanford" - More whistleblower punishment. Honestly, bosses who do this should be put in jail anyway, but there is no earthly reason why any private company should be hired to do the public's business when they can easily profit by failing.

"Bob Woodward Disappointed That Snowden Didn't Go To Him" - Poor old Bob could have had a whole new Deep Throat to play with. Except, you know, he couldn't, because he wasn't trustworthy.

Unexpected quotations: "America is way too quick to trade freedom for the illusion of security,' he told The Daily Beast. 'Whether it's allowing the NSA to go way too far in what it intercepts of our personal data, to our government monitoring of everything domestically and spending way more than we should. I don't know if I want to live in a country where lone wolf and random terror attacks are impossible 'cause that country would look more like North Korea than America." -- Blackwater founder Erik Prince, noticing that the policies that made him rich are bad when done by a Democratic president

Atrios named Tom Brower The Worst Person in the World Tuesday and wondered why he isn't being arrested. You'd think someone who makes a practice of roaming around town taking a sledgehammer to other people's private possessions would be in custody by now.

The NYT is lying with scare quotes - If something is true but you put it in scare quotes anyway, you're telling your readers it's actually not true. Sometimes you really need to use scare quotes - like when the media call antidemocratic radicals "centrist" as if for all the world they really represent some sort of middle ground, I want them to put it in scare quotes, but they don't, so I have to. But when "doctors" are actual doctors, "farm equipment" is actual farm equipment, and "rights" are actual rights, well, you're never going to understand the Iran "negotiations" that way.

Once again, Ezra Klein makes me want to pound my head against the wall. Jeez, Ezra, hasn't anyone explained to you yet that privatization just loads on inefficiencies and "big government" can do a better job without greedheads getting in the way?

"A Cleveland Wal-Mart store is holding a food drive - for its own employees." I can't even think about that without getting up and yelling, so I sure can't type anything.

Krugman, "The Geezers Are Not Alright" - Someone needs to tell The Washington Post that there are already old people living on catfood.
"Expanding Social Security [...] The rise in life expectancy, it turns out, is overwhelmingly a story about affluent, well-educated Americans. Those with lower incomes and less education have, at best, seen hardly any rise in life expectancy at age 65; in fact, those with less education have seen their life expectancy decline. So this common argument amounts, in effect, to the notion that we can't let janitors retire because lawyers are living longer. And lower-income Americans, in case you haven't noticed, are the people who need Social Security most."

So, basically, Zimmerman is just a violent loony.

"Mother fined $10 for not including Ritz crackers in kids' school lunch" - because gods forbid your kid might not be getting enough starch.

Cameron's Britain: "Police are cracking down on students - but what threat to law and order is an over-articulate history graduate?" Like Thatcher's Britain and Blair's Britain.

Don't make this film - a sequel to It's a Wonderful Life that seems determined to erase the virtues of the original film.

The death of science fiction's first Nobel Laureate, Doris Lessing, seems to have been a good excuse for the Evening Standard to dredge up an amusing little story about her night with Kenneth Tynan.

These concrete arrows point the way across America

Trailer for Mr. Peabody and Sherman. It doesn't feel like an improvement on the original.

Gah, I don't have time to finish playing the Doctor Who Google doodle. And if you don't, either, you might as well just watch this. (Later: Dammit, I couldn't resist!)

The making of the making of Doctor Who - This is about ten minutes of background to the BBC's drama about how the BBC's first female producer and the first Indian director worked together to get the right man and make the TV show we're all still watching and loving 50 years on. An Adventure in Space and Time starts off as Verity Lambert's story, but it's really William Hartnell's, and the choice of actor for this role was perfect - he not only looks like him, but he plays like him, and I kept forgetting I wasn't looking at William Hartnell. And here's a video review of the drama with which I can't disagree.