They say that all good things must end someday 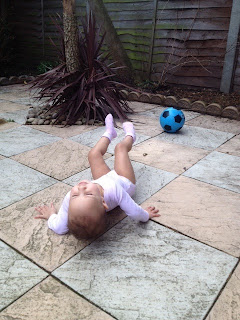 On one of the first nice days we had this year, the local baby hurricane ran outside and got down on the ground and kicked up her heels.

This week, Gaius Publius, Stuart Zechman, and Dave Johnson had a very useful discussion of the importance of brainstorming language, and how to promote democracy, and who the enemy is, on Virtually Speaking with Jay Ackroyd. I highly recommend this - pass it around. Our commenter CMike says: "Wow, finally it's like someone is ready to write the essential omeM llewoP. For me, this one is the most useful Virtually Speaking --or make that hour of liberal chat-- I've ever listened to. And a special shout out to Dave Johnson, you can't play the straight man any better than that."
Homework for this one is Stuart's earlier post on The Difference Between Us and Them.

Bruce Schneier has been writing up a storm about the disaster the NSA spying program is, and these first two links are from earlier in the week, before the emergence of the latest Snowden leaks, which he calls "explosive".
in The Atlantic, "The Only Way to Restore Trust in the NSA: The public has no faith left in the intelligence community or what the president says about it. A strong, independent special prosecutor needs to clean up the mess. "
in Wired, "How Advanced Is the NSA's Cryptanalysis - And Can We Resist It?"
But now he's sent me these links:
James Ball, Julian Borger and Glenn Greenwald in the Guardian: "Revealed: how US and UK spy agencies defeat internet privacy and security"
Nicole Perlroth in the NYT: "N.S.A. Able to Foil Basic Safeguards of Privacy on Web"
Bruce in the Guardian: "The US government has betrayed the internet. We need to take it back" and
"NSA surveillance: A guide to staying secure"

Here's a nice story about some local activism that's turning energy back into a local (and more sustainable) utility, despite massive disinformation campaigns from a big energy company. It's great to see people getting out there and doing the business - and even having some victories.

"Here Are All The People Who Have Died From A Marijuana Overdose [...] Last week, Attorney General Eric Holder announced that the federal government wouldn't intervene as Colorado and Washington state implement plans for a system of legalized marijuana for adults. The decision opened the floodgates for other states to pursue similar legalization efforts and outraged police groups apparently not excited to see a shift away from the failed war on drugs." But the War on (Some Classes of People Who Use Some) Drugs kills more people than it saves, and Holder certainly didn't say he would be de-prioritizing it in any other way.

Texas? "Saddam Was More Compliant With Inspectors [...] Yeah, you read that right. Nearly a half dozen Texas fertilizer plants housing ammonium nitrate, the extremely combustible substance that blew up a West, Texas fertilizer plant that claimed 15 human lives and injured over 200 others have refused to be inspected and, under Texas law, or the lack of them, they have that right. The article goes on to state that lawmakers were "intrigued" by the total lack of cooperation that saw the State Fire Marshall literally turned away at the front door by five fertilizer plant owners."

Dean Baker in AlJazeera, "Leisure or unemployment? It's a political question: The US is the only wealthy country in the world where workers are not guaranteed paid leave."

Digby, "They don't call it wage slavery for nothing."

There's just no excuse for the Trans-Pacific Partnership.

"What's wrong with the media" - Libby Spencer likes Jake Tapper more than I do, but his own words condemn his attitude to journalism.

"This Drug Could Save Thousands Of Lives A Year, So Why Aren't We Using It? [...] Despite the effectiveness of naloxone, many states have yet to adopt measures that would remove obstacles to distributing the drug to addicts, family members and first responders. The Fix, a website that covers addiction and recovery, explained opposition to naloxone as a "moral discomfort among drug warriors who apparently feel that the wages of drug use should be death." Many of the drug's critics claim that increasing access to naloxone will only encourage increasingly dangerous drug use, though studies have not been able to confirm this hypothesis. Proponents are quick to point out that any risks associated with naloxone would be minimal compared with the alternative -- death."

"A Pastor Asks A Politician Why He Supports Gay Marriage. It Seems He Wasn't Prepared For His Reply. What do you do when you're a politician live on television and a pastor who is against marriage equality asks you why you support marriage rights for all? You take note from Australia's prime minister, Kevin Rudd, a devout Christian, and do exactly what he does in these amazing four minutes."

Matt Drudge finally works it out.

The Library of Congress is Saving Pulp Fiction. (Thanks to Bob Michaelson.)

RIP: Fred Pohl, 93 - Aside from massive contributions to science fiction and fandom, he also made me learn to play bridge.

"Rochus Misch, Bodyguard of Hitler, Dies at 96 ...'I ask you,' he said in the Salon interview, 'if Hitler really did all the terrible things people now say he did, how could he have been our Führer? How is it possible?'"

This is too late for this year, but save it in case you need it in the future: How to interact with author Robert Jackson Bennett at Worldcon

Now, this looks like a Hollywood movie I wanna see: The Fifth Estate, with Benedict Cumberbatch as Julian Assange. (Nice title, that should stick in some craws.) "If you want the truth, you should seek it out for yourself. That's what they're afraid of: You."