And we speak of things that matter, in words that must be said 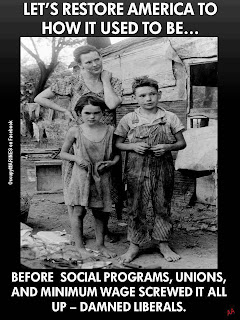 I was cruising the sidebar at Making Light and very nearly didn't click the link to "The MOOC Moment and the End of Reform," which at first glance might seem to be an arcane discussion of an educational fad, until I realized it was an elegantly restrained and yet scathing analysis of how incredibly stupid ideas are normalized by the pseudo-intellictual mumblings of Thomas Friedman and David Brooks and the general "Centrist" verbal magic tricks that pretend that utterly stupid or pointless ideas (usually scams to make rich people richer) that have a firm record of failure in the past are dusted off into something *NEW* and *MODERN* and *UTTERLY DIFFERENT FROM THAT OTHER THING IT LOOKS EXACTLY LIKE* because, you know, 21st Century The World Has Changed and, especially, INTERNET.

For example, why do I get the feeling that Jared Bernstein wants me to believe that technology is the problem when, y'know, right at this moment the Democratic leadership is trying to pass laws to give guest-worker visas to foreigners to do jobs millions of out-of-work Americans could be doing? (Leaving aside the fact that if technology is reducing the amount of available work, why isn't this reflected in available leisure time as it easily could be? If your workload has been reduced so that it only fills four days a week worth of time while producing the same amount of value, why aren't we all getting three-day weekends for the same weekly pay? And if all this modern technology is actually having the claimed effect, how is it that so many offices report reductions in staff for doing the same amount of work they always did, only with less time available for leave?) These days I get the willies whenever I hear well-known supposed progressives explaining why we can't have a nice country anymore, usually in language that simply elides the simple fact that we can decide to do this differently. As someone said, "You cannot understand economics without understanding power."

There are two shops out there making diamonds out of dust, finely honing language so that it appears to say something other than what it says in order to slip in ideas which, in their raw form, we would immediately recognize as anathema. One shop pretends to revere a civil (but relatively recent) past that has been eroded by modernistic thinking, and the other dismisses the past (well, the more recent bits of it) in order to sell you a bright, shiny future full of wonderful modern stuff, but both of them want to dispense with the civil, democratic past that some of us still hold in living memory in favor of an even older past in which we had that one thing that the Constitution is all about getting rid of: aristocracy.

(David Brin got into some fascinating background on this in his recent appearance on Virtually Speaking with Jay Ackroyd, where they discussed transparency and privacy, reminding us just how vital eliminating aristocracy really was to the formation of the United States.)

Stuart Zechman likes to point us to the New Democrat Network's paper (.pdf) heralding their fabulous new modern future in language meant to deceive us into thinking they're talking about something we might actually like:

The fact is that the productivity gap between the United States and Europe and Japan has increased steadily for more than a decade, pointing to America's single, most important economic advantage at a time for rapid globalization: basic competition is more intense inside the U.S. economy. Japan and Europe's large countries still maintain regulatory walls around much of their retail, wholesale, financial, business and personal service sectors, so they are still dominated by millions of inefficient, small companies with little incentive to change almost anything. America's more bare-knuckled competition at almost every level and aspect of its economy makes its workers and companies less secure, especially in a time of galloping globalization and technological progress. It also forces companies and workers to change all the time, by using the latest technologies and business practices to improve something they make or do, or come up with new products, processes and ways of doing business.

It is to our advantage that we've made life difficult for individuals and small businesses? Really? Isn't this actually a recipe for monopoly capitalism? And has there ever been a time when monopoly capitalism served anyone but the people who already controlled the monopolies? And how, exactly, is it an "advantage" if it's harder for our small businesses - and our individuals - to succeed than it is in other countries?

On the right, they say that liberals are bad because we want to do this modern thing (circa 1776) of hamstringing Big Money so it can't get bigger than all the rest of us combined. In the White House, they say that liberals are old-fashioned because we still believe in that democracy thing where the public is protected from Big Money getting together and squashing all the rest of us. They are not singing the identical tune, but their strains don't actually clash. It's not opposition, it's harmony.

And both strains reach the same coda. So I guess it's time to link again to those two classics, "What Is Conservatism and What Is Wrong with It?" and "Defeat The Right In Three Minutes".

This week on Virtually Speaking Sundays, David Waldman (KagroX) and Gaius Publius discussed why we don't want armed cops (and others!) in our schools, and the signs of government corruption. And at what point do people start to act?
Last week's guest on Virtually Speaking with Jay Ackroyd was former Baltimore police officer Peter Moskos, author of Cop in the Hood: My Year Policing Baltimore's Eastern District, who discussed the militarization of the police (and says The Wire is all true).

Your Daily Grayson: on the NSA revelations

"The US farm bill is a corporate victory and a slap to struggling Americans [...] It should be clear to members of Congress that improving the financial lot of Americans is more important than any other task at hand, as well as a task they have consistently failed to accomplish. Yet legislators keep blowing their chances to do anything constructive, leading even Federal Reserve chairman Ben Bernanke to chide fussbudget lawmakers for their counterproductive waste of time on cutting pie-in-the-sky estimates of deficits. So, in response to this very real, very pressing, very immediate crisis, Congress is creating a particularly grotesque imitation of economic stimulus. Congress is not providing any alternatives to struggling families as it cuts the food stamp program, it is just slashing the cost and hoping that poverty - and its siblings, unemployment and crime and homelessness - fix themselves. Good plan."

Actually, Americans don't like being spied on.
Aaron Swartz makes the cover of Time.
Thanks to Wendell Dryden for noting in comments former UK ambassador Craig Murray's post on the deceptive precision of the language that is used to justify a process of spying that effectively nullifies any legal protections that citizens of the US or UK have against programs like PRISM. "It is precisely analogous to our receipt of intelligence from torture, which I was told as Ambassador was perfectly legal as long as we don't request that the individual be tortured."
Marcy Wheeler (with a little help from Julian Sanchez) on The CNET 'Bombshell' and the Four Surveillance Programs [...] "Mueller didn't deny the NSA can get access to US person phone content without a warrant. He just suggested that Nadler might be conflating two different programs or questions. [,,,] The possibility that the government would do this kind of thing has been raised repeatedly since Russ Feingold did so repeatedly in 2009 during the FISA Amendments Act debates, speaking specifically about the content of calls to people overseas. It may be that, discussed in isolation, the government can avoid talking about what Feingold and Wyden and others have called a backdoor. Which is probably why they don't want us to 'confuse' (that is, understand the relationship between) the business records and content access." (And turdsplat from the administration suggests there's even worse we aren't hearing.)
And more from Atrios on The Big Grift, here and here.

Dean Baker says, "Fred Hiatt is Holding Head Start Hostage Until Liberals Support Cuts to Social Security and Medicare [,,,] One final point, there is no guarantee that even if liberals agreed to cut the benefits received by people on Social Security and Medicare that the money would go to domestic discretionary spending. In the past surplus funds have been used for tax cuts targeted to the rich. In the current political environment in Washington it would be absurd to assume that this could not happen again."

Commenter ifthethunderdontgetya professes to be "shocked" that it turns out there was game-rigging going on among the gamblers in the markets for "at least a decade". Libertarians tell me that this kind of thing can't happen because people simply won't give their custom to institutions that give them a bad product, but I wonder what all the people who were cheated have to say about that.

I'm so old, I can remember when wages didn't go down.

"Rand Paul's new outreach coordinator David Lane has declared a 'holy war' on 'us', That's a broad "us," by the way. Though most of the stories associated with this have focused on frothing homophobia against marriage equality and LBGT rights, a closer look at this homegrown call for jihad speaks to a war against a rainbow of people and issues far broader than our LBGT population, allies and marriage equality initiatives."

"Banning Psychedelic Drugs Hurts Research, Scientists Say [...] In a paper published online today (June 12) in the journal Nature Reviews Neuroscience, a group of researchers argues that drug laws enacted in the United States and the United Kingdom during the 1960s and 1970s have hindered vital research into the drugs' functions and therapeutic uses. The laws were designed to prevent drug use and drug harm, but they failed to do that, said paper co-author David Nutt, a psychopharmacologist at Imperial College, London."

Iain Banks: the final interview, in the Guardian.

Via Making Light:
Ken Mcleod on Iain Banks: " Literary merits aside, and generalising unfairly, the field as Iain found it presented a dilemma: American SF was optimistic about the human future, but deeply conservative in its politics; British SF was more thoughtful and experimental, but too often depressive. Iain broke out of that dichotomy with all the panache of the spaceship exploding from inside another spaceship on the cover of Consider Phlebas, the first of his SF novels to be published, by writing of an expansive, optimistic possible future rooted in the same materialist and evolutionary view of life that had in the past been seen only as a dark background to cosmically futile strivings."
"How The American University was Killed, in Five Easy Steps"
"The standard you walk past is the standard you accept." - Australian Army chief's scathing warning to members who would degrade women.
Vigilante Copy Editor
here's that bad advice you were hoping for
It's amazing how much talent was put together to make this horror.
Early McDonald's menus

US States Renamed For Countries With Similar GDPs

Grr, this just proves things, and up yours, Saatchi!

Witness the terrifying birth of a supercell thunderstorm

"This is the totally bonkers story of the US/Canada border."

Many years ago, convinced that you can never get enough cheese, I invented a recipe which is in this book. You can order it here.

This is not my usual sort of thing, but it's the single from the Broken Mirror Glass double LP released by Black October Records, also known as John Shirley's "Mountain of Skulls."