When your head tells you to run 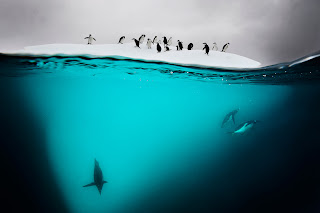 Avedon Carol and Joan McCarter (mcjoan) are this week's panelists on Virtually Speaking Sundays.
This week's guest on Virtually Speaking with Jay Ackroyd was Los Angeles Times Business Columnist Michael Hiltzik, about his book, The New Deal: A Modern History, "and the public understanding of Social Security and Medicare as 'safety net' for US citizens most in need, when they were intended to set citizen funds aside in a safe place where they can't be 'lost' by private sector institutions in 'panics' or 'bank failures' or 'bubbles' or 'depressions.'" (Background for people who like to do a lot of reading: Stock Exchange Practices. Hearings before the Committee on Banking and Currency Pursuant to S.Res. 84 and S.Res. 56 and S.Res. 97.. a.k.a the Pecora Commission hearings, 1932-1934. And for deep background, Horace Greeley Hjalmar Schacht.) I highly recommend that you listen and that you pass it on.

Sperling spills it: "Just FYI, Gene Sperling said today on his Reddit chat that the president really prefers the Chained-CPI and that it's not just an inducement to get the Republicans on board with the Grand Bargain. This may sound obvious, since it's been clear from before the inauguration that the administration wants to "reform" the so-called entitlements. But Sperling made it clear today that they believe in this on the merits."

Even Nancy Pelosi keeps talking like chained CPI could be reasonable, but the Progressive Caucus is showing signs that they don't want to play ball. They've produced their own budget plan, which so far even people like Yglesias admit is better than all the other proposals. But, as Taylor Marsh says, "Of course, it's dead on arrival, but that doesn't mean it's not a real work of economic progressivism that makes a lot more sense than austerity, which hasn't worked anywhere it's been tried. Beyond the progressive budget is obviously President Obama's much anticipated grand bargain, with Democratic 'leader' Nancy Pelosi now saying 'let's take a look' at chained CPI cuts through Social Security. It's the same Pelosi who allowed the Catholic Bishops to help write ACA, which included codifying the Hyde Amendment into law for the first time in history. The rest is written on the wall."

RJ Eskow on A President Who'll Cut Social Security - And Liberals Who Love Him Too Much: "The spectacle of a supposedly liberal President repeatedly and needlessly trying to cut Social Security is enough to bring a reasonable, economically literate person to the point of existential despair. To see leading liberal lights like Rachel Maddow and Ezra Klein chuckle indulgently at those foolish Republicans in Congress over the subject - Don't they know he's already giving them what they want? - is to risk plunging into the depths of that despair. [...] Silly, silly Republicans. Klein quotes one reporter as saying of the White House, 'They tell us three times a day that they want to do chained CPI!' That's right: The White House has been trying to impose this benefit cut on Social Security's elderly and disabled recipients for years, and Republicans don't even know. Neither do most Democrats, for that matter. They think they voted for a President who will defend those benefits, not work relentlessly to cut them. But Democrats like Maddow, Klein, and Chait know better. They know exactly what Obama's been trying to do. And their only complaint seems to be that he's not doing it effectively enough. We're not hearing much from the ‘left' side of the debate about the profound flaws, biases, and inherent cynicism behind both the President's policy and his rhetoric. [...] If things don't change, we'll remember President Obama for cutting Social Security - and his party will pay the price. Disabled and elderly Americans will pay an even higher price. And the Republicans will be laughing all the ways to the polls in 2014."

It's not news that a rich jerk is in the NYT pretending to care about our children's future and advocating that we steal even more from them than rich jerks already have stolen. But the comment thread below his post is heartening, at least as of five in the morning GMT on Friday. No one is falling for it. But then, I guess they've been reading Dean Baker.

Elizabeth Warren has some more good questions - this time about why a minority in Congress is holding up an appointment to her agency after Congress passed the law to create it. "And what I want to know is why there are agencies all over Washington who's rules are final, subject to the ordinary reviews and oversight, while the CFPB is the only agency in government, subject to a veto by other agencies. But unlike the CFPB, no one in the U.S. Senate holds up confirmation of their directors, demanding that those agencies be redesigned."
Matt Taibbi live-blogged the hearings.

This would be really good news if I didn't think it would be overturned: "Federal Judge Finds National Security Letters Unconstitutional, Bans Them. Ultra-secret national security letters that come with a gag order on the recipient are an unconstitutional impingement on free speech, a federal judge in California ruled in a decision released Friday."

Sam Seder's minions did a pretty good job covering for him while he took time off for the birth of his son Saul. One of them interviewed Christopher Petrella about the private prison industry, and there was a quick throwaway line during the introduction about how they're ending private prisons... not followed up. I couldn't find anything on the web about this and I can't figure out where that came from. Was it a gag? Because if it isn't, it should have been big news. It certainly didn't sound very likely.

The selection of a new pope from Argentina has caused some people to utter the words "Liberation Theology" again, but I'm not terribly hopeful that this pope will be any more useful than the last one, even though he rides the bus, or at least used to before he became pope.

If I were Scott Prouty, I would never have allowed my name and face to be in the press, after that 47% video went viral. Some of us still remember that Frank Willis, the security guard who noticed the Watergate break-in and was just doing his job, was never really able to find work again in Washington and suffered the consequences of this simple action. My immediate fear was that Prouty would never be able to find another job. It seems, however, that the United Steelworkers didn't want to let that happen.

I've mentioned my friend and sometimes colleague Peter Tatchell before. He's the most famous gay rights activist in Britain, so I've run into him a lot over the years, and we are usually (but not always) on the same side. In this case, though, Peter is giving a talk on what to me is Topic A these days - the anti-democratic push to destroy western economies.

Snow pic - Ruth had her camera out early this morning. (As I write, she says it's still coming down.) And she's also been writing about the long rifle.

A while back Swedish fan John-Henri Holmberg wrote an article for Earl Kemp's sf e-fanzine, called, "God, how silly!", about religion, the Enlightenment, and science fiction. A fine example of why Gibson said it's harder work to write for fanzines than to write professionally, because fanzine articles have to be better than that.

18 obsolete words, which should never have gone out of style and the Grandiloquent Word of the Day