One seems to hear words of good cheer 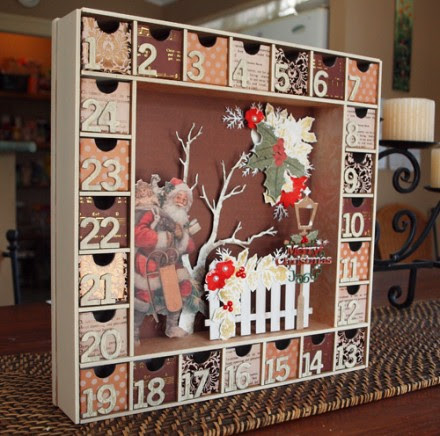 A bit late out of the gate, but I just can't get started without "Carol of the Bells." (Yes, it's true: I play that particular version over and over while I do the Advent list.) Now, let's see who still has Advent calendars....
Electric December
Christmas Magazine
Busted Halo Woodlands Junior School
North Pole
St. Mary Margaret
Your Punk Rock Advent Calendar
Chris' Invincible Super-Blog's Advent posts aren't strictly an Advent Calendar, but it's great fun and you really shouldn't miss December 6th.
* * * * *

My thanks to commenter someofparts for tipping me off to this chilling article that traces the predictable rise and fall of empire and reminds us what "irredentism" means, among other things. And how Toynbee tipped us on what our future may look like:

The first phase of that unfoldment begins with the rise and successful expansion of the imperial power. That expansion quite often involves the conquest of lands previously owned by less wealthy and powerful nations next door. For some time thereafter, neighboring societies that are not absorbed in this way are drawn into the imperial power's orbit and copy its political and cultural habits - German tribal chieftains mint their own pseudo-Roman coins and drape themselves in togas, people very far from America copy the institutions of representative democracy and don blue jeans, and so on. A successful empire has a charisma that inspires imitation, and while it retains its ascendancy, that charisma makes the continued domination of its borderlands easy to maintain.

It's when the ascendancy fails and the charisma crumbles that things start to get difficult. Toynbee uses a neat if untranslatable Latin pun to denote the difference: the charisma of a successful imperial power makes its borderlands a limen or doorway, while the weakening of its power and the collapse of its charisma compels it to replace the limen with a limes, a defensive wall. Very often, in fact, it's when a physical wall goes up along the border that the imperial power, in effect, serves notice to its historians that its days are numbered.

Once the wall goes up, literally or figuratively, the focus shifts to the lands immediately outside it, and those lands go through a series of utterly predictable stages. As economic and political stresses mount along the boundary, social order collapses and institutions disintegrate, leaving power in the hands of a distinctive social form, the warband - a body of mostly young men whose sole trade is violence, and who are bound by personal loyalties to a charismatic warlord. At first, nascent warbands strive mostly with one another and with the crumbling institutions of their own countries, but before long their attention turns to the much richer pickings to be found on the other side of the wall. Raids and counter-raids plunge the region into a rising spiral of violence that the warbands can afford much more easily than the imperial government.

For a good read, you should go to Corrente right now and read the whole front page. Aside from several important news stories I should have gotten around to but haven't, yet, there's a bunch of music and other smart stuff. (Also, of course, give if you've got it - it's one great blog.)

"Movie Studios Ask Google To Censor Their Own Films, Facebook and Wikipedia" - including legitimate sources. A sort of anti-advertising campaign for their own work? Or maybe it's just time to stop all this take-down notice mania and make studios think twice about sending such infringement requests. Copyright law is now so out of control anyway that nobody sane could support its current application.

"How could 'cuffed' suspect possibly shoot himself? [...] According to police, Carter somehow managed to get a gun and fired a single shot into his head. Just how the police officer who searched Carter was able to find what amounted to a dime bag of pot but missed a small-caliber handgun is a mystery to a lot of people. And so, too, is how Carter could have shot himself in the head, even though "his hands were still cuffed behind his back," according to the police report. His mother, Teresa Carter, told a Memphis, Tenn., television station that police said her son was shot in the right temple. But, she said, Carter was left handed."

Florida murders 14-year-old disabled girl. Apparently, they "couldn't afford" to do something that they could afford to do. Or was killing her the whole "money-saving" plan?

Who is Grover Norquist? That's what most of us used to wonder - why was Grover Norquist, who is no more than a political operative and certainly not an economist - let alone one who cared about whether ordinary Americans could afford their taxes - on television all the time and taken seriously by all the big mouthpieces in Washington? Why should anyone feel they had to sign Norquist's anti-tax pledge? Why did people come to his meetings all the time, and how did he end up being such a big deal? But they made him a big deal, and now that they have, they're trying to walk it back as his famous pledge now stands in the way of the Grand Bargain to steal your national economic security benefits.

TOM THE DANCING BUG: A HOSTESS TWINKIES AD - CAPTAIN INDUSTRY VS. UNION-MAN (Thanks for the heads-up, Kip!)

Oh, no! One of the best reporter-analysts in the blogosphere is stepping back. Gonna miss you, Dday.

RIP: Dave Brubeck, 1920-2012. Just a day short of his 92nd birthday, one of the greatest names in jazz is gone. Ivan Hewitt in the Telegraph said he had "Endless curiosity combined with stubbornness. WaPo news video. A nice surprise for me when I went to davebrubeck.com and heard seasonal music playing. More obits from Auntie Beeb, the Guardian, The San Francisco Chronicle. And here is his YouTube channel.

The Hobbit: An Unexpected Parody is not my kinda music, but it's fun anyway.
Ditto this Shot-for-shot remake of the intro for The Prisoner.

Among the many wonders currently showing at The Mary Sue, Neil Patrick Harris tells Doctor Nathan Fillion Mayfair about his Puppet Dreams. Also, a nice picture of Neil Gaiman having breakfast with Matt Smith, Lego characters from The Hobbit, and the exciting news that the trailer for Star Trek Into The Darkness is narrated by Benedict Cumberbatch.