Really couldn't get away too soon 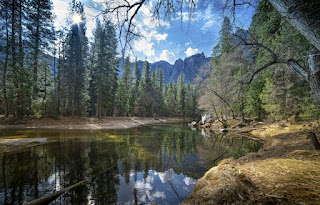 "The Merced River" is one of Jim Collyer's many images from nature.

A few months ago I started to think to myself, "The police are secretly on strike." Sure, they are out there doing weird stuff, but what they aren't doing is stopping crimes. They barely respond to serious calls, they solve crimes at historically low rates, they even just stand around and watch assaults or emergencies where people could be dying. What are they for? Back in June, in "Why Are Police So Bad at Their Jobs?", Alex Sammon wrote: "Not for nothing, clearance rates have dropped to all-time lows at the same time that police budgets have swollen to all-time highs, suggesting that more funding has actually resulted in police being less effective. 'It is a great public mismatch in understanding, training, and expectations,' Baughman told me. 'Increases in police officers or police budgets have not been shown to reduce crime or make us safer.'" But maybe Alex Pareene's answer in "What Do Cops Do?" is simpler than my surmise: "Having spent many years observing cop behavior, reading news about cops, and occasionally even asking them for help, I have come to a pretty simple but comprehensive answer: They do what is easy, and avoid what is difficult. Seen through that rubric, much cop behavior suddenly becomes much more explicable."

It's funny how the good things in the supposedly Democratic bill that was recently passed don't actually begin until *after* the next presidential election (so Dems won't get credit for them when people go to the polls, but if the GOP wins as expected, they get the credit when folks start to feel the benefits). But as Stiglitz warned a couple years ago, "Republicans planted a time bomb in their 2017 tax cut bill that will actually raise most people's taxes: On Saturday, writing for The New York Times, Nobel Prize-winning economist Joseph Stiglitz warned that many people's taxes are about to go up. But it's not because Joe Biden's campaign plan raises taxes, as President Donald Trump has repeatedly and falsely claimed. It's because the Tax Cuts and Jobs Act — the controversial tax cut bill passed by Republicans on a party-line vote in 2017 — has a provision that will start slowly raising taxes next year. And ultimately, Stiglitz warned, many low and middle income people will actually pay more than they did before the bill passed in the first place. "President Trump and his congressional allies hoodwinked us," wrote Stiglitz. "The law they passed initially lowered taxes for most Americans, but it built in automatic, stepped tax increases every two years that begin in 2021 and that by 2027 would affect nearly everyone but people at the top of the economic hierarchy. All taxpayer income groups with incomes of $75,000 and under — that's about 65 percent of taxpayers — will face a higher tax rate in 2027 than in 2019." "For most, in fact, it's a delayed tax increase dressed up as a tax cut," wrote Stiglitz."

"Why Obama-Era Economists Are So Mad About Student Debt Relief: It exposes their failed mortgage debt relief policies after the Great Recession. [...] Let's be very clear: The Obama administration's bungled policy to help underwater borrowers and to stem the tide of devastating foreclosures, carried out by many of the same people carping about Biden's student loan cancellation, led directly to nearly ten million families losing their homes. This failure of debt relief was immoral and catastrophic, both for the lives of those involved and for the principle of taking bold government action to protect the public. It set the Democratic Party back years. And those throwing a fit about Biden's debt relief plan now are doing so because it exposes the disaster they precipitated on the American people."

"Why It'll Be Tough for Republicans to Cancel Student Debt Cancellation: There are significant legal hurdles, and if Democrats implement debt forgiveness quickly, significant political ones as well. Republicans are so incensed with President Biden's student loan forgiveness that they want to go to court to block it. That seems like political suicide to me, and if they want to actively align with debt collectors and label themselves as the 'Gimme Some Money' party to 43 million student borrowers, let them go ahead. The main legal hurdle Republicans face to their dream of immiserating student debtors is the concept of 'standing.' A potential plaintiff has to be harmed by the cancellation of student debt in order to sue the federal government over it. And standing is going to be hard to come by, for a variety of reasons."

RIP: "Barbara Ehrenreich, author who resisted injustice, dies aged 81: Barbara Ehrenreich, the author of more than 20 books on social justice themes ranging from women's rights to inequality and the inequities of the American healthcare system, has died at the age of 81. The news that Ehrenreich had died on 1 September was released by her son, Ben Ehrenreich, on Friday. He accompanied the announcement with a comment redolent of his mother's spirit: 'She was never much for thoughts and prayers, but you can honor her memory by loving one another, and by fighting like hell.' Ehrenreich battled over a half a century as a writer committed to resisting injustice and giving a voice to those who were typically unheard." It was already as late as 1978 when I first encountered her (in For Her Own Good), but I feel like she informed my whole adult life. Still a bit shattered to know this legendary bright light is gone.

RIP: "Mikhail Gorbachev: Last Soviet leader dies aged 91: Mikhail Gorbachev, the former Soviet leader who brought the Cold War to a peaceful end, has died aged 91. Mr Gorbachev took power in 1985 and introduced reforms, as well as opening up the Soviet Union to the world. But he was unable to prevent the slow collapse of the union, and many Russians blamed him for the years of turmoil that ensued. Outside Russia, he was widely respected, with the UN chief saying he had 'changed the course of history'. 'Mikhail Gorbachev was a one-of-a kind statesman,' UN Secretary General Antonio Guterres said. "The world has lost a towering global leader, committed multilateralist, and tireless advocate for peace." The hospital in Moscow where he died said he had been suffering from a long and serious illness." I remember watching what Gorbachev was doing and realizing he was walking a perilous tightrope with only the slimmest chance of success. He might have made it if he'd had me write that speech after they rescued him, but he went the wrong way on it and just pissed people off. A shame, I really think he wanted what was best for his nation but there were just too many who wanted him to fail.

On Labor Day, Richard Eskow writes about "Barbara Ehrenreich and the Real Work of Labor Day [...] But every woman who took part in them helped advance labor rights, by being present, conscious, and brave. Our speech and actions resonate in ways we may never come to understand. Our duty, and our privilege, is to do the work whatever the outcome. Barbara Ehrenreich did that work. So did the women whose actions she and Fuentes recorded. Every walkout, every outstretched hand, every word written or spoken in defense of workers' rights, is a victory—whether it results in immediate and obvious success or not. The only failure is not to have tried."

"Despite Texas' lack of a state income tax, most Texans pay more in taxes than Californians, data shows: Those coming to Texas for a tax break may want to turn around if they are not in the top 1 percent of earners. A recent post on Reddit's main economic forum included a 2018 graphic that shows Texans pay more taxes than Californians unless they are in the top 1 percent. The post is one of the highest-rated in the last month on the social media platform. It is unclear why the post was shared now."

This isn't Point/Counterpoint, but it's two ways of looking at our current economic discourse on corporations and one follows the other. Tony Williams wrote "Debt slavery is a natural consequence of unregulated capitalism [...] A corporation has no morals. A corporation has no empathy for people who are affected by its actions. A corporation's only goal is to enrich its bosses and shareholders. Corruption and pollution are simply ways to reduce cost; economists call this an externality. If a person behaved like a corporation, we would call them dangerously insane. [...] In summary, Wall St is a government sponsored organized crime syndicate. It will not reform itself unless the perpetrators go to jail, and even that might not be enough. Wall St needs to be dismantled." But Dave Johnson thought this misunderstands what a corporation is, and wrote, "Understanding What a Corporation Actually Is Can Help Restore Democracy [...] "Here's the thing: A corporation is a contract. It is a legal agreement enabled by our ('We the People') government. That's it. Corporations are not sentient entities. Contracts don't 'think' or 'want' or 'need' or say' or 'care' or 'do' anything. Neither does a will, nor a lease, nor a confidentiality agreement. Corporations also can't be 'greedy' or 'criminal' or 'good' or 'altruistic.' But people can. When we say these things about corporations we are reinforcing misunderstanding of what a corporation is. This helps the executives running corporations get away with all kind of bad acts. [...] Here is the key point. Obviously the reason we pass these laws is to benefit us. That's supposed to be why our democratic government does things – to benefit us: We the People; to serve our interests. Why ELSE would a democratic government of We the People have written legislation creating these agreements that create entities called corporations?"

"Inside The Right's Historic Billion-Dollar Dark Money Transfer : Industrialist Barre Seid funded a new dark money group run by Trump judicial adviser Leonard Leo, who helped eliminate federal abortion rights. An elderly, ultra-secretive Chicago businessman has given the largest known donation to a political advocacy group in U.S. history — worth $1.6 billion — and the recipient is one of the prime architects of conservatives' efforts to reshape the American judicial system, including the Supreme Court. Through a series of opaque transactions over the past two years, Barre Seid, a 90-year-old manufacturing magnate, gave the massive sum to a nonprofit run by Leonard Leo, who co-chairs the conservative legal group the Federalist Society."

About a minute and a half of 1957: 15th World Science Fiction Convention— 0.00Jean Bogert with gun at start. 0.05 Guy with glasses looks like Sandy Sandfield, 0.06 Norman Shorrock over shoulder of guy in mask, 0.12 Eric Jones interviewed, 0.25 Ron Buckmaster interviewed, 0.50 Frank & Belle Dietz interviewed in alien costumes. Round-faced teenager in the background is Mike Moorcock. 1.18 Guy with moustache, right rear is Ken McIntyre