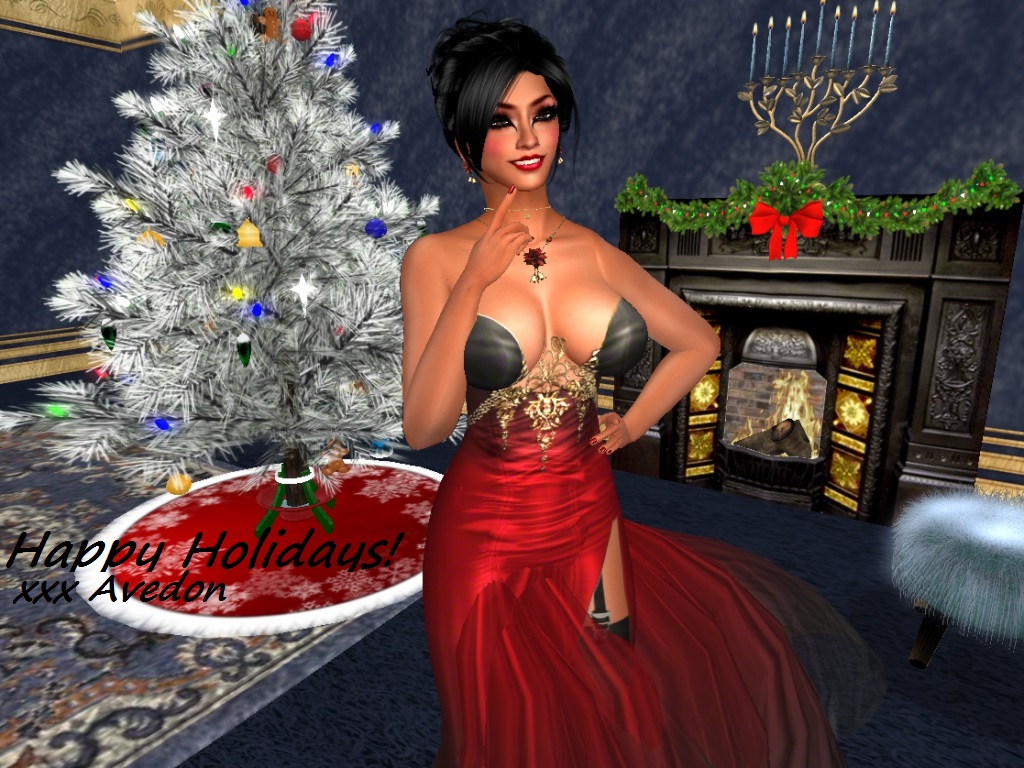 It's Christmas Eve for me, although in truth it's really Christmas morning here where everyone else is asleep in their beds with visions of sugarplums etc. I've decided to pack up documenting the atrocities for the night and just tack the traditional Christmas links up for you to enjoy. Some of us go back to them every year just because. And if you haven't seen them yet, you might just like them. It's a balmy 38 degrees Fahrenheit (3° centigrade) and the rain has been bucketing down all night. So here's some holiday wishes from my avatar and me.
* Mark Evanier's wonderful Mel Tormé story, and here's the man himself in duet with Judy Garland.
* Joshua Held's Christmas card, with a little help from Clyde McPhatter and the Drifters.
* Brian Brink's tour-de-force performance of "The Carol of the Bells"
* "Merry Christmas from Chiron Beta Prime."
* Ron Tiner's one-page cartoon version of A Christmas Carol

"That Time the FBI Scrutinized It's a Wonderful Life for Communist Messaging: The film 'deliberately maligned the upper class,' according to a report that didn't like the portrayal of Mr. Potter as a bad guy. [...] According to the FBI report, the informant told the field agent that 'in his opinion, this picture deliberately maligned the upper class, attempting to show the people who had money were mean and despicable characters.' The source also suggested that the film could have been made differently, by portraying Mr. Potter as a conscientious banker who was simply 'following the rules as laid down by the State Bank Examiner in connection with making loans' and as 'a man who was protecting funds put in his care by private individuals and adhering to the rules governing the loan of that money rather than portraying the part as it was shown.' "

"Medicare Privatization Scheme Faced Legal Questions About Profiteering: Government attorneys expressed concerns that the Medicare direct contracting model — begun by Trump, and continued under Biden — was geared to benefit specific companies. [...] The direct contracting model was announced publicly in April 2019 and began its implementation phase in October 2020. The project pays private companies a predetermined but individualized amount per year, per patient, regardless of what the company spends on care, and has persisted and grown under the Biden administration."

Josh Gottheimer is a mendacious little spiv. "Josh Gottheimer's Wild Claims In Rutgers Speech Are Falling Apart: The New Jersey Democrat claimed that a protester screamed 'Jew!' at him and that Jamal Khashoggi's organization has links to Al Qaeda. REP. JOSH GOTTHEIMER, a New Jersey Democrat, attacked the organization founded by Jamal Khashoggi on Monday as linked to Al Qaeda, echoing allegations that Saudi officials have leveled to muddy the waters around the state-sanctioned butchering of the Washington Post journalist. In a speech at Rutgers University, Gottheimer criticized the school for hosting Khashoggi's organization for an event. 'At another event, the same group hosted Democracy for the Arab World Now, DAWN, whose officials have connections to Al Qaeda and Hamas networks,' Gottheimer said. 'Hamas sympathizers, or others with ties to other terrorist organizations involved in 9/11, have no place on college campuses. Associates of Palestinian Islamic jihad have no place on this college campus. I know we all believe that hate has no home here. It's time we all practice what we preach.' During his speech, Gottheimer also claimed that at an earlier protest organized by the Working Families Party, somebody had shouted 'Jew!' at him. 'Not long ago, I held an event in my district to talk about the benefits of the bipartisan federal infrastructure bill, only to have members of the Working Families Party disrupt the event by screaming 'Jew' at me,' he said. While he did not specify which event he was referring to, representatives from the Working Families Party say they only showed up at one, on September 20. A review of video of the event provided by the Working Families Party suggests that Gottheimer is either lying or appears to have misheard the protesters. As he left an event out a back door, protesters urged him to engage in one of his regular constituent events that he calls 'Cup of Joe with Josh,' in lieu of town halls that his constituents have demanded. 'This is your Cup of Joe, Josh. This is your Cup of Joe,' yelled Lisa Schwartz of Teaneck, New Jersey. At the time of the protest, Gottheimer was under intense pressure at home and in Washington to get behind Biden's Build Back Better Act. 'That's the only time we saw him, and it was so ridiculous, he avoided us like the plague,' Schwartz, a retired social worker, told The Intercept. 'We just wanted five minutes of his time.'"

"Joe Biden's disgraceful cave on family separation [...] The negotiated deal to offer some measure of compensation to families ripped to pieces by the Trump administration's barbaric policies fell apart because somebody leaked the details of the negotiation to the Wall Street Journal, the fash went predictably nuts about it, and Joe Biden decided that this was a good reason to back out on the whole thing."

"US Army Creates Single Vaccine Effective Against All COVID & SARS Variants, Researchers Say: Within weeks, Walter Reed researchers expect to announce that human trials show success against Omicron—and even future strains. [...] The vaccine's human trials took longer than expected, he said, because the lab needed to test the vaccine on subjects who had neither been vaccinated nor previously infected with COVID. Increasing vaccination rates and the rapid spread of the Delta and Omicron variants made that difficult."

"Purdue Pharma Appeals Judge Strikes Down Opioid Settlement: Purdue Pharma LP's multi-billion dollar opioid settlement was dealt a surprising blow on Thursday when a federal judge reversed a bankruptcy court's earlier approval of the deal. U.S. District Judge Colleen McMahon on Thursday struck down the OxyContin maker's sweeping opioid settlement, putting the accord at risk of collapsing. Supporters of the deal have warned that the alternative to a settlement is years of costly -- and potentially fruitless -- litigation. Purdue Pharma said in a statement that it will appeal. In the meantime, it's a victory for a handful of state attorneys general and an arm of the U.S. Justice Department, which have been working to overturn the settlement. Attorneys general from states including Washington, Connecticut and Maryland want to block the deal so they can keep suing Purdue's owners, members of the billionaire Sackler family, over their role in the opioid crisis. The settlement would prevent that, giving Purdue's owners broad legal protections from opioid-related civil lawsuits. McMahon said the drugmaker's bankruptcy judge erred in granting those releases." The settlement would have allowed the Sacklers to protect their billions under a bankruptcy shield.

"Susan Hutson defeats Marlin Gusman in Orleans Parish sheriff's race: First-time candidate Susan Hutson toppled 17-year incumbent Marlin Gusman in the Orleans Parish sheriff's race on Saturday, a stunning rebuke for a seasoned New Orleans politician and a sign that the local progressive movement to reform the criminal justice system is here to stay. With 350 of 351 precincts reporting, Hutson had 53% of the vote to Gusman's 47%. WWL-TV called the race just before 10 p.m. Hutson is the first Black woman elected as a sheriff in Louisiana history. Along with Orleans Parish District Attorney Jason Williams, self-styled reformers of the criminal justice system now control New Orleans' two top elected law enforcement posts, a remarkable reversal in a city that was once one of the most incarcerated places on the planet. Hutson has pledged to double down on efforts to reduce the jail's population, to stop an 89-bed jail expansion, to end charges for phone calls from jail and to bring the lockup into compliance with a federal reform agreement."

"Charges Dismissed Against Motorist Brutalized by SFPD Officers After Accidental Collision in 2018." This is another case that demonstrates that police lie on the stand.

"During Questioning In Albany, NYPD Commissioner Shea Backtracks On Bail Reform Law As Big Reason For Gun Violence." And this one on how lying police commissioners help further the push against bail reform.

RIP: "Michael Nesmith, Monkees Singer-Songwriter, Dead at 78: Monkees singer and guitarist Michael Nesmith, a pop visionary who penned many of the group's most enduring songs before laying the groundwork for country rock with the First National Band in the early Seventies, died Friday from natural causes. He was 78. 'With Infinite Love we announce that Michael Nesmith has passed away this morning in his home, surrounded by family, peacefully and of natural causes,' his family said in a statement. [...] Nesmith was known as the Monkee in the green wool hat with the thick Texas drawl, and the writer of songs like 'Mary, Mary,' 'Circle Sky,' 'Listen to the Band,' and 'The Girl I Knew Somewhere.' But he raged behind the scenes that the group didn't have creative control of its albums, and in 1967 led the successful rebellion against record producer Don Kirshner. The group would subsequently release Headquarters and other albums created largely on its own." I don't think I knew that he wrote "Different Drum" — and that Linda Ronstadt sang it because they wouldn't let the Monkees perform it.
Micky Dolenz gave an interview upon hearing the news: "Micky Dolenz Remembers Michael Nesmith: 'He Was Our Leader the Whole Time': 'You could never, never have talked him out of the farewell tour,' says Dolenz of his 55-year Monkees bandmate. 'He was absolutely determined to finish that tour. [...] Something happened when we sang together, and it always did with us. That was also the case in the comedy, in the shtick we used to do. We just clicked. You can't invent that or force it. It just happens, or it doesn't." (Paywalled.)

RIP: "Gothic Novelist Anne Rice Dead At 80: The author wrote the 1976 novel Interview with the Vampire, which was later adapted into a movie starring Tom Cruise and Brad Pitt in 1994." I have nothing to say about this, I didn't know her, never read the books, didn't even see the movie, but I recognized her place in the genre and know this as a milestone.

RIP: "bell hooks, author and activist, dies aged 69: In acclaimed works Ain't I a Woman and All About Love the writer shared her ideas about race, feminism and romance with flair and compassion. Gloria Jean Watkins, better known by her pen name bell hooks, has died aged 69. [...] The author, professor and activist was born in Hopkinsville, Kentucky in 1952, and published more than 30 books in her lifetime, covering topics including race, feminism, capitalism and intersectionality."

"The Media Is Rewriting Bob Dole's History as a Vicious Right-Wing Attack Dog: Today, pundits are pretending that Bob Dole, who died this past weekend, was a patron saint of compromise and decency. But for virtually his whole career, Dole was an unscrupulous partisan warrior who did big favors for wealthy donors and pushed a radical anti-government agenda."

"What if Everything You Know About Murder Rates and Policing Is Wrong? Five common myths about the FBI's homicide data, debunked. Homicides across the United States rose by an estimated 30 percent in 2020, the largest one-year increase on record, according to recently released data from the FBI. But don't jump to conclusions about what that means. As soon as the FBI shared this eye-popping statistic in late September, a flood of fear-inducing headlines made it seem like Americans are now living through a massive wave of violence. Police chiefs, mayors, and journalists quickly speculated about the possible causes for the uptick, often blaming (without evidence) protests to defund law enforcement and stop police brutality. Don't believe them."

Jon Schwarz says "Don't Look Up Is As Funny And Terrifying About Global Warming As Dr. Strangelove Was About Nuclear War: Adam McKay's new movie may be the first film in 57 years to equal the comedy and horror of Stanley Kubrick's masterpiece."

I should probably get around to watching the 2019 Breslin and Hamill: Deadline Artists one of these days.