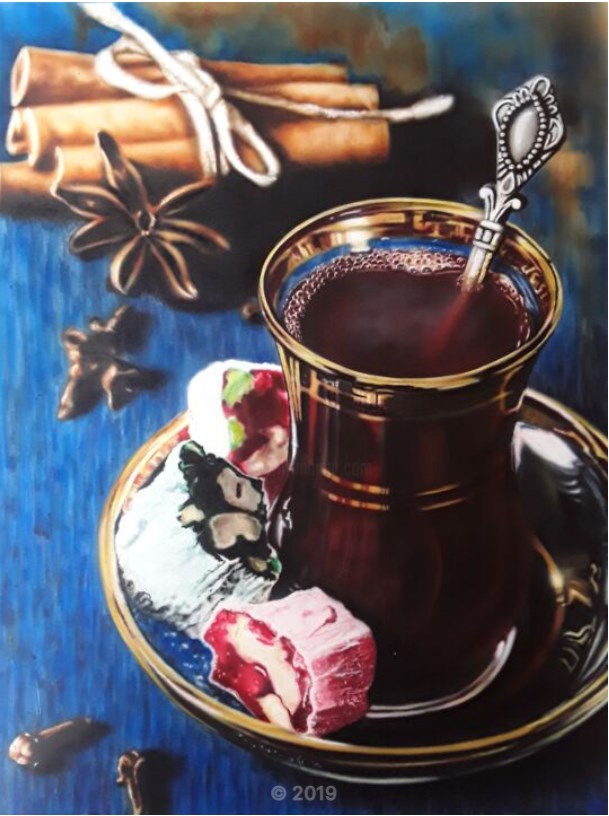 "A Moment of Relax" by Catia Trovarelli is from the Hyperrealism collection.

So, Kyle Rittenhouse was cleared of all charges, having convinced a jury that he was afraid for his life and shot in self-defense. Since the prosecution couldn't prove otherwise, he was Not Guilty. That's the law. And I'm not linking to any stories about it because they're all so politicized I can't stand it. Most of what was in the news was slanted and overblown and wrong. Yes, Rittenhouse "crossed state lines," but since he lived a mile from the state line, that hardly means anything. Nor was he haring off across another state to interfere in a strange community; he worked in that community, and his father lived there. But it's the kind of thing right-wingers will point to as "proof" of a left-wing bias in the media, never realizing that it's the division, not anything "left", that the media is promoting.

Meanwhile, in the case of the murder of Ahmaud Arbery, all three white men, Travis McMichael, Greg McMichael and William 'Roddie' Bryan, were convicted and face the possibility of life in prison. For many, this feels like a particular victory since one of the accused was an ex-cop. All but one of the jurors were white, which had worried some. Both McMichaels will appeal.

The "Bipartisan Infrastructure" bill passed both Houses without the BBB being passed, because Pelosi rounded up some Republicans to support it while the progressives were still digging in their heels for passage of both simultaneously. Once she called the vote, she nullified the progressives' leverage. Since the whole point of BIF was to kill BBB, a lot of people are wondering whether the continued coverage of attempts to negotiate the latter is merely a charade meant to demoralize progressives further. Biden signed BIF so now it's down to implementation, as David Dayen has been warning. There's a reason that there is absolutely no optimism about whether Democrats will hold the House or Senate. Most people expect a bloodbath.

David Dayen, "Fighting the Inflation Profiteers: Companies are raising prices well above increases in their costs. The only antidote is to finally take action against corporate power. In a time of high inflation, you hear a lot about companies 'passing costs' on to customers. In order for companies to maintain their God-given right to earn a profit, they must raise prices to offset the cost of producing goods and getting them into peoples' hands. And thanks mostly to the hidden risk, exposed by the pandemic, of neoliberal gospels like just-in-time logistics, deregulation, and offshoring, prices really are going up. But there's something else mixed in with this latest bout of inflation. Companies aren't just passing costs onto us. With corporations using inflation as a cover for raising their prices, you and I are passing profits onto companies. 'Executives are seizing a once in a generation opportunity to raise prices,' reads a Wall Street Journal story explaining that around two-thirds of the largest publicly traded companies are showing profit margins higher today than they did in 2019, before the pandemic. Over 100 companies show profit margins of 50 percent or more above those 2019 levels." And it's even worse than that.

"2 Men Convicted of Killing Malcolm X Will Be Exonerated After Decades: The 1966 convictions of the two men are expected to be thrown out after a lengthy investigation, validating long-held doubts about who killed the civil rights leader. [...] For decades, historians have cast doubt on the case against the two men, Muhammad A. Aziz and Khalil Islam, who each spent more than 20 years in prison. Their exoneration represents a remarkable acknowledgment of grave errors made in a case of towering importance: the 1965 murder of one of America's most influential Black leaders. [...] A 22-month investigation conducted jointly by the Manhattan district attorney's office and lawyers for the two men found that prosecutors and two of the nation's premier law enforcement agencies — the Federal Bureau of Investigation and the New York Police Department — had withheld key evidence that, had it been turned over, would likely have led to the men's acquittal."

"Jury Returns $31.8M Civil Verdict Against Alt-Right Defendants in Charlottesville 'Unite the Right' Lawsuit: A federal jury has returned a $31.8 million civil verdict in a case connected to the 'Unite the Right' protest in Charlottesville, Va., in Aug. 2017. A collection of nine plaintiffs sued a number of figures in the alt-right movement — including Jason Kessler, Matthew Heimbach, Richard Spencer and Christopher Cantwell — on a series of federal and state law claims. The jury deadlocked on the federal claims but returned verdicts on the state law claims in various dollar amounts. [...] Legally, the jury agreed that a far-right conspiracy was afoot in Charlottesville — one which resulted in legally cognizable tort injuries."

"GOP Offers Taste of 2022 Attack Ads If Democrats Approve Tax Cut for Millionaires: 'Democrats' SALT tax giveaway is handing Republicans a potent political weapon to crush Democrats in the 2022 midterm elections.' [...] On Monday, Rep. Jason Smith (R-Mo.) shared a 60-second spot lampooning House Democrats' plan to raise the cap on state and local tax (SALT) deductions from $10,000 to $80,000 through 2026—a proposal that would predominantly benefit the rich. One recent analysis estimated that U.S. millionaires would receive an average tax cut of $16,760 from the provision."

"It's not just white people: Democrats are losing normal voters of all races: Democrats fear they are losing white swing voters over racial politics. Three studies suggest that the party's elite culture may be the real problem."

"Leonard Peltier Is America's Longest-Serving Political Prisoner. Biden May Be His Last Hope.: The FBI put the Native American activist behind bars 44 years ago based on lies, threats and no proof he committed a crime. Why is he still there? [...] HuffPost talked to a number of people who have played a role in either fighting or preserving Peltier's imprisonment over the years — international human rights attorneys, senior-level officials from the Obama administration, Peltier's longtime allies — and they all pointed to the same reason for him remaining in prison: resistance from the FBI."

"Five Reasons the Left Won in Venezuela: These elections should put the Biden administration on notice that continuing to support the MUD, and in particular, the fiction of Guaidó as "interim president," is a failed policy." Basically, the left kept Covid deaths low, gave people health care and kept them fed, and the opposition is hugely unpopular.

"New bill quietly gives powers to remove British citizenship without notice: Clause added to nationality and borders bill also appears to allow Home Office to act retrospectively in some cases [...] Frances Webber, the vice-chair of the Institute of Race Relations, said: 'This amendment sends the message that certain citizens, despite being born and brought up in the UK and having no other home, remain migrants in this country. Their citizenship, and therefore all their rights, are precarious and contingent.'"

RIP: "Stephen Sondheim: master craftsman who reinvented the musical dies aged 91." I don't have to tell you anything, but for that columnist I won't link to who didn't seem to know: West Side Story. Gypsy. And "Send in the Clowns."

RIP: "Longtime Beach Boys Sideman Billy Hinsche Dies at 70: Billy Hinsche, longtime Beach Boys touring member and one-third of '60s pop-rock trio Dino, Desi and Billy, has died at age 70. Lucie Arnaz — daughter of I Love Lucy stars Lucille Ball and Desi Arnaz, and sister of the latter band's Desi Arnaz Jr. — confirmed Hinsche's death Saturday on Instagram, writing, 'Giant cell carcinoma. Only diagnosed a couple weeks ago. It ravaged him like an out of control train.' Hinsche was born in Manila, the Philippines in 1951, but he moved with his family to Beverly Hills as a child, becoming friends with Desi Arnaz Jr. and Dean Martin's son Dean Paul Martin. The trio eventually formed their band and signed with Reprise Records, who released their four proper studio albums and a run of singles, including the 1965 hits 'I'm a Fool' (later covered by Alvin and the Chipmunks) and 'Not the Lovin' Kind.' During this period, the group landed opening spots for major acts like the Mamas & the Papas, the Lovin' Spoonful and, most famously, the Beach Boys. The latter's Brian Wilson later co-wrote Dino, Desi and Billy's final single, 1970's 'Lady Love.' The Beach Boys connection proved crucial for Hinsche, who joined that band as a touring multi-instrumentalist from 1971 to 1977, then again from 1982 to 1996. He also appeared on a handful of their LPs: His credits include backing vocals on 1973's Holland, and guitar on 1976's 15 Big Ones and 1978's M.I.U. Album." I admit, I never really listened to DD&B, but the Beach Boys, that's a whole 'nother thing.

Pareene, "The Mess Age: We need to talk about what we talk about when we talk about talking about popular things [...] Running against an unpopular president remains a good way to pick up seats in Congress no matter what your message is, and that's just what the Democrats did again in 2018. The problem is the margins were smaller than 2006, and, unlike Bush, Donald Trump's unpopularity seemed eerily stable and entirely disconnected from actual events. Now, everyone with a brain expects Democrats to lose Congress in the next few years, and perhaps the White House again as well, which is why everyone is yelling at each other online all day about messaging and popularity."

"Conservative Democrats' Lucrative Career Path: Democratic senators who oppose core party agenda items and upset the base can't lose — because if they do, they get paid. [...] To understand what's in it for conservative Democratic senators who play the party's rotating villain role, look at those who came before them: Many of those who do big business' bidding and then either fail to win reelection or retire quickly end up scoring lucrative careers on K Street. It's the ultimate win-win situation."

"Alec Karakatsanis: This is a thread about how journalists decide what is 'news' and what isn't. Anyone shaping the news and anyone consuming the news should understand who decides what counts as news, how they decide it, and what determines what they say about it. Here, I ask a few questions: This thread is inspired by the gap in what mainstream media treats as urgent and what are the greatest threats to human safety, well-being, and survival. For example, air pollution kills *10 million people* each year and causes untold additional illness and suffering. It rarely features in daily news stories. Why? Instead, daily news is dominated by 'crime' stories. But even these are 'crime' stories of a certain kind: they aren't stories about the many air pollution crimes. They are the kind of "crimes" publicized by police press releases, usually involving poor people. Much of deadly U.S. air and water pollution is also criminal, but 'law enforcement' chooses to ignore it, and thus so do most journalists."

"Passing Fancy: In the Jim Crow South, courts understood that rigidly enforcing the rules against mixed marriage would have been a disaster—for whites."

"Elections and the Illusion of Black Political Power: Black politicians may be openly conservative or pretend leftists but their constituents rarely get what they need. Politics absent a mass movement is a recipe for inaction or even outright betrayal."

APOD: The Extraordinary Spiral in LL Pegasi — I've never seen this before, it's pretty cool.

Game of Thrones: The Musical

Listen to the final four songs from the last Monkees concert ever. Only Mike and Mickey left, but the crowd loved them.

@tedgioia: "I've never seen anything like this on film before. Paul really has nothing at the 30 second mark—but 45 seconds later he's got the makings of a hit single."