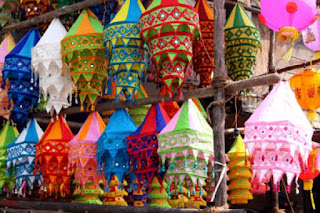 Happy Dawali - the Festival of Lights, or "the festival of loud bangs," as we know it here, started tonight, and it was like a war zone out there with all the fireworks going off.

TPP is released; Bernie Sanders says "Now that the text of the Trans-Pacific Partnership has finally been released, it is even worse than I thought. It is clear to me that the proposed agreement is not, nor has it ever been, the gold standard of trade agreements."
* Mass Mobilization To Stop The TPP Announced, As Text Is Released
* And here it is! "The Transpacific Partnership: Leveling the playing field for American workers & American businesses." Yeah, right.

Brad Friedman wants to know if the Kentucky governor's race was stolen: "Lower down the ballot, many Democrats got tens of thousands more votes than Bevin. We see, again, the nightmare scenario I've warned about for so many years: a U.S. election where all of the pre-election polls suggest Candidate X is set to win, but Candidate Y ends up winning by a huge margin instead and nobody even bothers to verify that the computer tabulated results accurately reflect the intent of the voters." I'm saying this again: If Democrats aren't willing to fight for clean elections, you can blame them for the losses, because the GOP would not be doing this stuff if Dems were putting up a fight. That goes for gerrymandering, too. People need to stop telling themselves fairy stories about why we keep losing elections and start doing something about why we keep losing elections, and one of those reasons is that the Democratic leadership likes having Republicans around to blame their crummy policies on. Paper ballots, publicly hand-counted on the night, people.

Mathematician suspicious of election fraud hires lawyer to force Kansas to hand over voting records: A Kansas mathematician said this week that she had retained a lawyer and had scheduled a discovery hearing to force Secretary of State Kris Kobach to hand over voting records after they showed evidence of election fraud. 'I don't understand why those patterns are there, the patterns are very definitely real. But we don't know what's causing them or why they're there,' Wichita State University statistician Beth Clarkson told KSHB last month. 'They do fit what would be expected if election fraud is occurring, and that's very concerning.' [...] Kobach, however, went to court to block Sedgwick County from releasing voting records to Clarkson." Now, why would that be?

"Christian pregnancy centers freak out after California turns tables and forces them to disclose abortion rights."

"There Is No Reasonable Case To Be Made For A Democratic Take Back Of The House, Not While Steve Israel Is Still There: There is virtually no serious coverage of the colossal failure of the DCCC under Chris Van Hollen and Steve Israel, two incompetent Pelosi allies who have presided over the loss of dozens of Democratic House seats in 2010, 2012 and 2014-- and for countless missed opportunities." The real reason Democrats keep losing seats is sabotage from the top of the party.

The National Journal has an important and illuminating article by John Judis on The Return of the Middle American Radical ("An intellectual history of Trump supporters") that everyone really ought to read, because I think these people can be reached.

"Sanders: I hate missing Senate votes: Sen. Bernie Sanders (I-Vt.) says he does not like missing Senate votes due to his 2016 Democratic presidential campaign. 'My job [that] I'm paid to do right now is to represent the people of the state of Vermont in the United States Senate,' he said on MSNBC's 'Andrea Mitchell Reports. 'I will miss votes, but I'm trying to miss as few as I possibly can. I am extraordinarily proud to represent my great state in the Senate," Sanders continued. 'We're working very hard on a number of issues,' he added. "And while it is difficult and very time-consuming to be a full-time candidate and to be a full-time senator, that is at the moment what I'm trying to do.' Sanders was responding to a question about Sen. Marco Rubio's (R-Fla.) track record in the Senate. Rubio, a GOP presidential candidate, has come under bipartisan fire for missing votes for campaign events."

I would truly love to believe in the predictive infallibility of Western Illinois University's mock election, what with it giving Bernie Sanders an overwhelming victory. For some reason, though, I just don't. "History of the Mock Presidential Election: This simulation always takes place the year before the presidential election year, and three months before the actual Iowa caucuses. The genesis of this mock presidential election began at the University of Iowa in 1975 with two political science doctoral students, John Hemingway and Rick Hardy. In that year, students selected Jimmy Carter over Gerald Ford - long before anyone really knew of Jimmy Carter. In the years that followed, Rick Hardy expanded the format and engaged thousands of students at the University of Missouri-Columbia where students registered a perfect record of selecting the subsequent winning presidential party. In 2007 and 2011, Hardy and Hemingway teamed up again to conduct a massive campus-wide simulation at Western Illinois University. In 2007, Western students selected Barack Obama as president at a time when no one thought he could win! And, in 2011, students narrowly re-elected President Obama over the GOP ticket of Mitt Romney and Paul Ryan! How's that for reality!"

2 Louisiana Officers Charged With Second-Degree Murder in Killing of Boy, 6

Bernie Sanders on Israel and the Palestinians - He's still a two-state solution man, but at least he doesn't cheer when Palestinians get killed.

"Hillary Clinton's 2008 position on gun control wasn't what it is now."

Wow, Matt Bruening really doesn't like Hillary, he says, "My beef with Hillary is mainly that she is an enemy of the poor."

Atrios found this one a few days back and I'm starting to think the Guardian needs to label these things as their "The Tories Speak for Labour" columns.

Cocaine Production Plummets After DEA Kicked Out of Bolivia

Charlie Pierce: "Here's a plan. Stop sending weaponry to a place if you can't keep track of it. Stop trying to sort out which people doing the slaughtering are the Good People doing the slaughtering. Best as I can figure out, we're supporting some people in Iraq that we're opposing in Syria, and vice versa, and now it seems we're arming all sides, occasionally by accident. I don't mean to shout, but, honestly...? They lost four Hueys? They lost a CN-235? A CN-235 is 70 goddamn feet long! Have they checked under the cushions of the sofa? This would all be funny if, you know, it were funny."

"How and why MI5 kept phone data spy programme secret"

"NASA just saw something come out of a black hole for the first time ever ."

Neoliberalism's War on Workers: An Interview With Peter Fleming

Verso announces book "From leading feminist figures like Roxane Gay and Barbara Ehrenreich to a new generation of young women writers and thinkers" about False Choices: The Faux Feminism of Hillary Rodham Clinton.

"Fear Of The Walking Dead: The American Police State Takes Aim While zombies may be the personification of our darkest fears, they embody the government's paranoia about the citizenry as potential threats that need to be monitored, tracked, surveilled, sequestered, deterred, vanquished and rendered impotent."

"Confessions of a Paywall Journalist: Thanks to a booming trade press, lobbyists and other insiders know what's happening in government. The rest of the country, not so much."

"Remembered, Remembered, The Fifth Of Novembered" - the Million Mask March.

Men Just Don't Trust Women -- And It's A Huge Problem

A glowing review of Rick Perlstein's The Invisible Bridge: The Fall of Nixon and the Rise of Reagan

Remembering Cleveland's Muhammad Ali Summit, 45 years later - mouseover the faces if you can't remember them all.

50% female cabinet appointments lead to 5000% increase in guys who suddenly care about merit in cabinet.

You might recognize the name of the late Augustus Owsley Stanley III for other things, but he made lots of recordings of the music scene and they're all on tape and need to be digitized before they crumble. Spread the word and help preserve the works of the Grateful Dead, Big Brother, and a lot of other acts that he recorded.

I actually think The Huffington Post has a lot of nerve asking writers to let them use their work for free. Someone is making money off that site, and it should be the contributors, but it isn't, they aren't even paying their bills.

Bill Maher to Poor People Stop Thinking Your Interests are the Same as the Rich - Yeah, it's Bill Maher, but this is good stuff.

You won't learn anything illuminating from this, but I had fun watching these two windbags slugging it out.

The Clara Theory of this Doctor Who arc

This Holiday Greeting Flowchart should help you out with Bill O'Reilly's War On The Spirit of Christmas.

Of course, you could just buy a little stool, but then we'd miss the beauty and wonder of this ad.

The one Christmas thing you have to do in November is shop for your Advent Calendar. I don't think I'll be getting this one but I know people who'd love it. And then there's this one. Oh, wait, there's more!

Filling in the gaps in the works of Thomas Kincaid

Well, lookee there, Google celebrates Adolph Sax.
* Oh, that reminds me, they did a little game for Halloween.

Procol Harum - A Whiter Shade of Pale, live in Denmark 2006

How Dave Clark mostly wrote one of the most successful bands of the British Invasion out of pop music history.