It takes a lot to laugh, it takes a train to cry 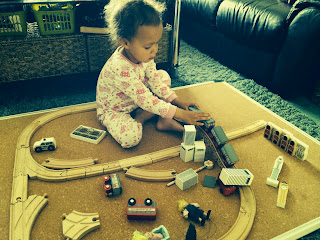 On The Majority Report, David Huyssen discussed his book Progressive Inequality: Rich and Poor in New York, 1890-1920, about why the progressive movement wasn't what was needed and was failing the public.

When It Came To Wall St., David Brat Actually Ran As Elizabeth Warren: "Brat told Internet radio host Flint Engelman that the 'number one plank' in his campaign is 'free markets.' Brat went on to explain, 'Eric Cantor and the Republican leadership do not know what a free market is at all, and the clearest evidence of that is the financial crisis - When I say free markets, I mean no favoritism to K Street lobbyists.' Banks like Goldman Sachs were not fined for their role in the financial crisis - rather, they were rewarded with bailouts, Brat has said."

Chris Floyd: "US and European politicians won't explain it because any honest explanation would expose the emptiness at the core of all their proffered reasons for the Terror War. They can't explain it because the Terror War system -- including the increasing militarization and repression in their own countries -- has now become organizing principle of Western society. Or rather, it is the latest incarnation of what has been the guiding principle of Western society since World War II: organizing society and the economy around war, either active war or the ever-present "threat" of war (assiduously exaggerated -- or even manufactured -- at every turn). For government and big business, the immense power and profit and control they inevitably accrued from conducting total war on a global basis was far too enticing to give up once the war was over. The full mobilization of society's resources for war simply carried on; indeed, was expanded and amplified."

"Republicans Aren't The Only Anti-Gay Members Of Congress [...] On April 29, 2009, the House passed the Hate Crimes Prevention Act, 249-175, 18 Republican abandoning their hate-filled and bigoted leaders, crossing the aisle and voting with the Democrats. Boehner, Cantor, Ryan and McCarthy were against the bill and they had support from 17 of the most racist and conservative Democrats in the House"

"China Laughed When It Saw How Cheap Solar Could Be: Do you remember when Dr. Evil was going to hold the world ransom for $1,000,000? This is what we are facing today in Solar - the Dr. Evil ultimatum. The cost to get Solar to coal parity is going to be laughably tiny."

The technocrats who want to eliminate cash - and why we need to oppose them: "So there you have it: Let Yglesias and his technocrat-manager friends bring all money under the control of government and corporate financial institutions (never mind their recent performance record) and hard times will be a thing of the past! Does that sound too good to be true to anyone else?" I'm sure the idea of never having to use cash at a counter must sound great to anyone who has never, ever needed to send someone else out to the shops for something, but I have had days when I simply couldn't have functioned if I'd been unable to hand someone some cash. Like those times when you need to have someone pick up your prescriptions and you don't want them to have to pay for it, or those moments when you just don't have time to do two things at once. And when I buy something directly off of a friend, I don't see why I should have to find some way to make an electronic transfer to them instead of just pulling a couple of quid out of my pocket. And that's just what's on the surface, the everyday stuff. There could be a lot more important reasons to deal untraceably among honest people. Especially when you know how dishonest your government is.

Adam Roberts in the Guardian, "War of the worlds: who owns the political soul of science fiction?: In the sci-fi genre, two diametrically opposed ideologies are battling it out as leftwing writers embrace otherness, while the rightwingers look up to authority"

"Bill Watterson's Strips For Pearls Before Swine", and "‘Calvin and Hobbes' creator Bill Watterson returns to the comics page - to offer a few ‘Pearls' gems".

"Saskatoon honours Joni Mitchell with new parking lot: After years of contemplation on how to pay tribute to an iconic Canadian musician, the City of Saskatoon will honour Joni Mitchell with a 400 space parking lot. The Joni Mitchell Paradise Parking Lot will be located beside a Wal-Mart and several other box stores located in the city's East End." (Okay, it's a parody site, but it was good for a laugh. Waitin' on the Tree Museum.)