I could never disguise all my little white lies 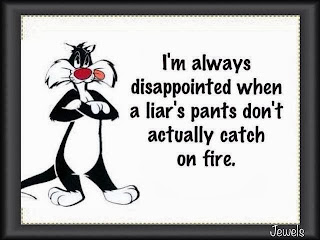 So, President Constitutional Scholar gave a speech in which he assured the nation that there were no abuses by the NSA (something even the NSA admits isn't true), and we need to violate the Constitutional rights of every single American in order to defend the Constitution. (Marcy Wheeler provides the annotated speech here.)
- Interestingly, Bruce Schneier reported the day before that, "Today I Briefed Congress on the NSA: This morning I spent an hour in a closed room with six Members of Congress: Rep. Lofgren, Rep. Sensenbrenner, Rep. Scott, Rep. Goodlate, Rep Thompson, and Rep. Amash. No staffers, no public: just them. Lofgren asked me to brief her and a few Representatives on the NSA. She said that the NSA wasn't forthcoming about their activities, and they wanted me -- as someone with access to the Snowden documents -- to explain to them what the NSA was doing. Of course I'm not going to give details on the meeting, except to say that it was candid and interesting. And that it's extremely freaky that Congress has such a difficult time getting information out of the NSA that they have to ask me. I really want oversight to work better in this country." (Marcy Wheeler had some observations about that.)
- Even the conservative Washington Post has Barton Gellman getting into the weeds of problems with Obama's definition of "spying".
- Here's David Sirota's piece from Thursday, "NSA defenders' shameless 'national security' bait and switch ". I like to remind people as often as I can that Bush started the surveillance program in March of 2001. I wonder why Obama and people like him keep talking about how it was a reaction to 9/11, as if it were not already in place and failing to do what it is supposedly for. Maybe because preventing terrorism is not what it's for.

"Court Strikes Down FCC Open Internet Order: WASHINGTON -- On Tuesday, the D.C. Circuit Court of Appeals struck down the Federal Communications Commission's Open Internet Order. In its decision, the court said that the FCC lacked the authority to implement and enforce its rules under the legal framework the agency put forth. The FCC's 2010 order was intended to prevent broadband Internet access providers from blocking or interfering with traffic on the Web. Instead of reversing a Bush-era FCC decision that weakened the FCC's authority over broadband, and establishing solid legal footing for its rules, former FCC Chairman Julius Genachowski pushed for rules under the complicated legal framework the court rejected today."
- Shepard Smith Tells Anti-Net Neutrality Guest He "Sound[s] Like A Corporate Shill" "The Whole Internet Disagrees With You."
- Thom Hartmann, "The Internet Is Dead, Long Live the Internet!"

Ari Berman in The Nation, "Members of Congress Introduce a New Fix for the Voting Rights Act: Today Representatives Jim Sensenbrenner (R-WI) and John Conyers (D-MI) and Senator Patrick Leahy (D-VT) introduced legislation to strengthen the Voting Rights Act of 1965 in the wake of the Supreme Court's decision last June invalidating a critical section of the VRA. The legislation, known as 'The Voting Rights Amendment Act of 2014,' represents the first attempt by a bipartisan group in Congress to reinstate the vital protections of the VRA that the Supreme Court took away." This is not likely to go anywhere, weak tea though it is, but I was interested to see Sensenbrenner as one of the proposers. What I'm more interested in, however, is why all this legislation was ever about localities. There are certain actions that we have always known exist for the purposes of vote-suppression. They should be illegal everywhere. My VRA would always have listed them as felonies and any clever new methods we discover would automatically be added to them. (Isn't it odd that changing the polling place in a district without proper notification of the public isn't a recognized voter-suppression tactic and has not been outlawed?) And I'm sure you already know how I feel about any method of voting other than paper ballots hand-counted publicly on the night.

Yves Smith: "Yes Virginia, Obama and the Democrats Are Mussolini-Style Corporatists, Just Like the Republicans: Reader dSquib flagged a 'bizarre' article by Mike Konczal in the New Republic titled, 'Corporatism' is the Latest Hysterical Right-Wing Accusation: The secret history of a smear.' dSquib seemed quite perplexed that anyone would deem calling Obama a corporatist, which as we'll demonstrate is patently true, a smear."

Dave Johnson, "8 Phony GOP Solutions for Poverty That Will Only Bring More Economic Pain" - Dave missed a bet on Rubio's proposal to "remove the marriage penalties in safety net programs." Yes, there's a real marriage penalty, and it was introduced by conservatives to damage these programs - and poor families. It's part of that whole "truly needy" construct where the idea was supposed to be that a family with both parents present doesn't really need assistance and it's just that the lazy, shif'less father should get off the couch and get a job. Men moved out of the house so their wives and kids could get the benefits that were not available as long as the father was in the home. That was a huge sacrifice on their part in the hope it would afford help to their families, but of course the result was splintered families. If Rubio wants to get rid of this nasty bit of right-wing chicanery, I'm all for it. The only trouble is that there's precious little welfare left for those poor families to collect, since conservatives and "centrists" have been consistently conspiring together since LBJ left office to destroy War on Poverty programs. Having mostly succeeded, they are now going more directly after the New Deal.

Dean Baker take-down of "David Brooks' Primitive Defense of the Rich [...] Fans of arithmetic everywhere know that if the rich get more, and the economy is not growing faster, then everyone else gets less. (It might be primitive, but it's true.) And the economy has been growing very slowly for the last thirteen years and actually pretty slowly for the whole period in which inequality has been increasing."

Much as I dislike Dana Milbank, I sure nodded my head when I saw him saying, "Obama is off-message on the unemployed [...] On the House floor, 25 Democrats interrupted debate on a spending bill, coming forward one at a time to ask Republican leaders to take up an extension of unemployment benefits, which lapsed last month. The previous day, Senate Democrats had been doing their part to keep the issue prominent, provoking Republicans to block the legislation with a filibuster. This is exactly the sort of time when presidential leadership is most effective, when consistent use of the president's megaphone can focus national outrage and force holdouts to relent. But at the moment House Democrats were having their rebellion, Obama was giving a speech in Raleigh, N.C. - about wide bandgap semiconductors." Of course, there's a reason for this: Obama doesn't actually want to do anything for the unemployed.

Why artificial sweeteners make you fat

Can this really be not a gag?

The pool hall between two worlds - I don't know why the Flash didn't catch that drink before it spilled, though.

The Beatles in comics

"50 Years Later: The Greatest Beatles Performance of All Time" - Just for the record, I could not only hear the Beatles really singing and playing even from way up in the stands at RFK Stadium, I could hear all of their mistakes. Anyone who doesn't think they were a great performing band is out of their minds.

"The Night Has a Thousand Eyes"